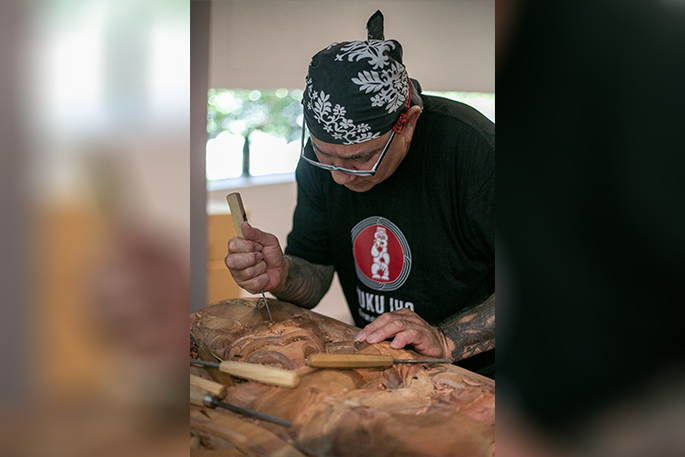 An enduring connection across the globe will remain long after the Rugby World Cup has ended, with two symbolic taonga set to connect the Japanese and Māori cultures – and highlight the similarities between the two.

The bespoke carved kūwaha and mauri stone have been presented to Japan by the people of Aotearoa, cementing the relationship between the two countries.

The gesture is part of a campaign led by Tourism NZ to support New Zealand’s presence at the world’s largest rugby tournament. It’s is designed to increase the profile and awareness of New Zealand in Japan, as well as strengthen cultural diplomacy between the two nations.

The kūwaha, named Te Haeata Whero, offers a threshold celebrating cultures, beliefs and identities and an acknowledgement of the connection between Japan and New Zealand.

Weighing about 530kg, Te Haeata Whero stands 3.6m at the highest point, at 3.2m at its widest and is carved from centuries-old reclaimed Tōtara and Kauri.

“The kūwaha is a doorway to a house in Māori culture and, in this instance, is a metaphor for identity. We are literally welcoming people into our house, strengthening the ‘doorway’ to New Zealand for Japanese people by sharing narratives of people and place. The doorway reflects stories and carvings inside that connect both Japan and New Zealand,” says James.

He says the name, Te Haeata Whero, or the red dawn, refers to the Central Plateau, where dawn is signalled by the red light on the eastern side of Mount Tongariro.

It was predominantly carved at NZMACI by James, supported by carvers Kawana Waititi and Lenny Boonen, chosen for their attention to detail. 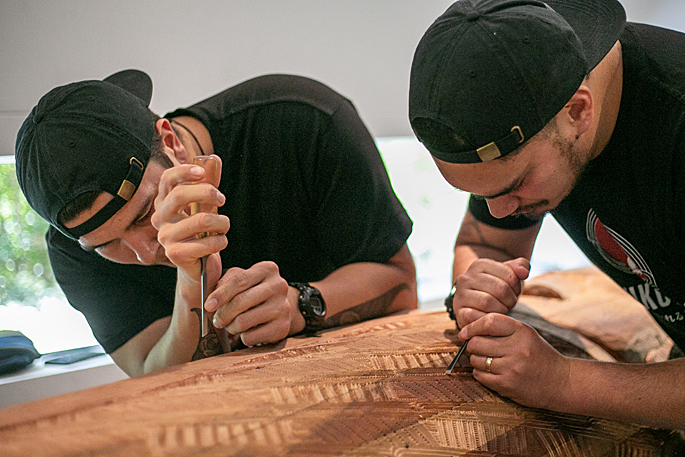 The korero told through Te Haeata Whero focus on the concepts of the sun and light, showcasing Māori narratives relating to the sun.  It also features the silver fern representing New Zealand and the All Blacks, while cherry blossoms feature within the painted patterns, known broadly as kowhaiwhai.

Sitting within Te Haeata Whero is a mauri stone Te Kopu Whānui, which represents the connection between the people of New Zealand and Japan.

The mauri stone comes from Ngāti Hikairo ki Rotoaira, in New Zealand’s central plateau region. Ngati Hikairo are also the guardians of Opotaka, the place where the haka originated from.

The mauri stone is seen as a conduit for the earth’s energy and draws and acknowledges the energy that connects New Zealand and Japan. Japanese people and visitors from around the world to Japan can touch the stone and feel the energy and connection to New Zealand

James says while the two taonga are separate physical pieces, together they offer the taonga of the unique relationship and understanding between New Zealand and Japan, and the sharing of knowledge, values and connection over time.

He says the kūwaha was one of the more unique pieces he has worked on, given the high level of secrecy surrounding it – so much so that his two fellow NZMACI carvers didn’t even know where the piece was destined to go, or the story behind it.

The carving was started in New Zealand before being continued as part of the Tuku Iho Living Legacy exhibition in Japan in August.

“Seeing the Māori culture shared with other indigenous people is a particular highlight, especially in areas where NZMACI is able to prove the worth of its Government mandate by demonstrating New Zealand’s progress in fostering and showcasing Māori Arts and Crafts.”

“I hope this carving will cement that connection forever.”