Steamers ready for battle against Taranaki 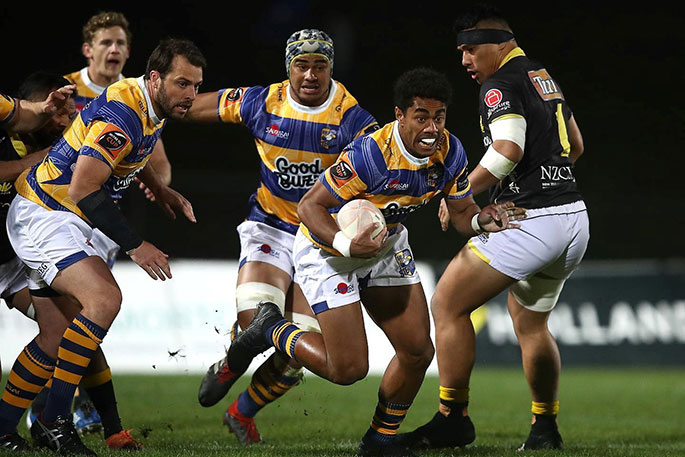 Steamers on the charge against Wellington. Photo: Bay Of Plenty Rugby

The Bay Steamers will field almost the same side that narrowly lost to Te Whanganui-a-Tara (Wellington) when they take on Taranaki on Saturday.
Taranaki will still be smarting after they let the Log o’ Wood slip from their grasp in their narrow loss to Ōtākou (Otago).

The home side will be keen to take their frustrations out on the Steamers when they play them at Yarrow Stadium in Ngāmotu (New Plymouth) on Saturday at 2.35pm.
The Steamers will be equally looking to make amends for not coming away with a win from a game they dominated in territory and possession.

It’s the second time this season the side has had a premier team on the ropes and haven’t delivered the knock-out punch.
Steamers coach Clayton McMillan isn’t a man who gets flustered, he knows he has the side to beat any team in the Mitre 10 Cup.

His side is stacked with talent in the forwards and backs.
The Steamers forward pack is a revelation this season, often finding themselves dominating their opponents at scrum time.

Their ability to rumble it forward during phase play, often has Steamers fans salivating at the prospect of what is to come.
Regularly, a tight five don’t get the adulation they deserve, but this season, Steamers captain and poumua wātea (loose head prop) Aidan Ross and his other four cohorts, have become the centre act in a side that is promising something special.
Despite Sam Cane being on World Cup duties, Mitch Karpik has made the poutaha wātea (openside flanker) role his own this season, turning over opposition ball regularly and having the speed and power to break tackles almost at will.
Poutaha kūiti (Blindside flanker} Hugh Blake uses his 103kg frame, as if he has little regard for his own safety. While Ajay Mua is deceptively quick and doesn’t need an invitation to cause havoc around the paddock from the nama waru (No, 8) position.
Then you go to the Steamers back-line and mix together the experience of 40-game veteran Chase Tiatia, along with 32 game stalwart Dan Hollinshead and live wire Richard Judd.

It only takes the garnish of youth, excitement and enthusiasm from Kaleb Trask, Mathew Skipwith-Garland as well as the blistering pace of Fa’asiu Fuatai and Emoni Narawa to give the perfect combination to worry any side in the competition.
McMillan says the team has had a good build up for this weekend’s clash with Taranaki.
“I reckon it’s been one of our better preparation weeks to be fair. We took some encouragement from our performance against Wellington.

“We were disappointed with the outcome, but we’re encouraged with the things we managed to achieve, and we’ve taken the leanings into this week and it’s been really productive.”
The coach expects Taranaki to be a real challenge on Saturday.
“Taranaki are a good side, and well coached. They have a good roster and a proud history. So, at home we expect them to be a really tough, and they would have come away from last week with some areas that need to be improved to get a better outcome this week.”
Two players reach a special milestone this Saturday, Fuatai and Aaron Carroll play their blazer game when the take to the field.