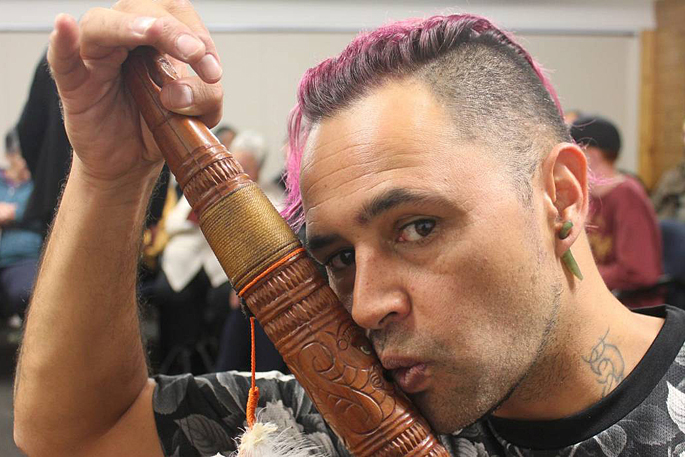 A Kiwi musician whose work has won Grammy awards will perform in Palmerston North as part of Te Wiki o Te Reo Māori.

​Jerome Kavanagh will use his extensive collection of taonga pūoro (traditional Māori instruments) during two performances that promise to create a unique musical and storytelling experience at Te Manawa Museum on Sunday.

The whānau show will take place from 2-3pm and will include instruments such as the nguru (small flute), putātara (conch shell trumpet) and koauau toroa (albatross-bone flute).

From 6pm to 7pm, Kavanagh will present his internationally toured Oro Atua Sound Journey performance, which sees him create "an orchestra of the voices of elements", where he crafts a space of relaxation and healing through songs and stories.

Kavanagh, originally from Rangiwaea, near Taihape, has played taonga pūoro since he was 16 and his talent has taken him and his instruments to England, the United States, India and throughout the Pacific, with the aim of bringing Māori music and culture to a broader audience.

The Hato Pāora College old boy thrived within the school's emphasis on performing arts, and eventually became a teacher, before deciding to follow a path of teaching others about traditional musical instruments.

Kavanagh contributed and featured on Grammy-award winning album Calling All Dawns, by Christopher Tin, which won best classical crossover album at the 2011 Grammys.

Tickets for the Whānau Show are $7 for adults, $4 for under-18s and under-4s are free. A family pass (2 adults and 2 children) is available for $20. Booking is not required.

Entry to the Sound Journey is $20. Booking is essential and can be done at the Te Manawa front desk, or by calling 0800-4-A-MUSEUM.

Te Manawa will have a focus on Māori language events and activities throughout Te Wiki o Te Reo Māori.

Art and family activities to increase knowledge of Te Reo culminate in a Kai Night from 6pm on Friday and Kavanagh's performances on Sunday.