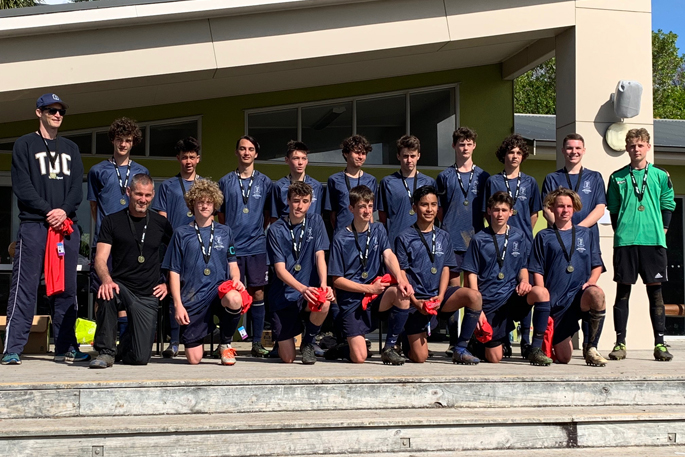 For the first time, the Tauranga Boys’ College junior football team are winners of the NZSS Hillsdene Tournament.

They managed to beat Hamilton Boys’ 1-0 in what coach Scott Furness says was a thrilling end-to-end final.

The previous encounters throughout the season between the two teams, saw them take a win each so the final was bound to be a close match.

Nine years ago, the original Hillsdene Trophy Tournament was set up by Scott at the Boys’ College as an invitational event for junior players to give them tournament experience before they got to 1st XI level.

“Three years ago it became the NZSS tournament and this year it sold out, with all 24 places being taken. Next year it’s likely there will be some sort of criteria for entry as we look to continue to raise the level of competition even further,” says Scott.

“Last year and the year before Boys’ College finished third, losing each of those semi-finals in penalty shootouts, before winning the third/fourth play-off.

“This year we were determined to do better, and the tournament win was a complete squad performance – all 16 members contributed and we didn’t have any ‘bad luck’ with injuries, only one player wasn’t fit for selection for the final against Hamilton Boys’.”

The Tauranga Boys’ squad went through all six pool games with six wins, and beat Rosmini College in a one-sided semi-final.

The team scored 49 goals throughout the four days, with the Golden Boot being awarded to Alex Searle who netted 15 times, despite being rested for two pool matches leading into the knockout phase.