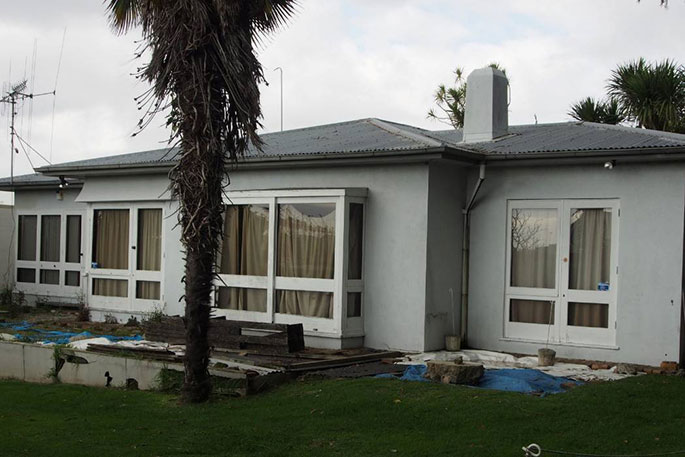 The section at 11 Mission Street that is proposed to be given to the Otamataha Trust. Photo: Matt Shand.

A Tauranga City Councillor is planning to spend $50,000 of his own money to challenge a controversial decision to gift a section of land to a Māori Trust.

An earlier motion to gift the land directly to The Elms Foundation, rather than the trust, was defeated 5-6.

But Councillor Rick Curach, who was the swing vote in that earlier decision, says he "absolutely would have" voted for it had some omitted information been included in the council briefing.

"This information showed that The Elms Foundation had a preference.

"It's my understanding the issue will come back to council to be reconsidered."

Fellow councillor John Robson says the letter from The Elms Foundation should have been included in the councillor briefing and he was planning to fund a judicial review if the decision is not revisited.

"This is not the first instance of something like this happening. We need to make sure the council machine works properly."

The decision on whether to gift the section of land at 11 Mission Street to either trust has been divisive.

There were 775 public submissions on the proposal with 58 per cent opposed to the Otamataha Trust being given the section.

Councillor Larry Baldock says some of the submissions should be "sent to the race-relations commissioner" as racist tones slipped into the rhetoric.

Former mayor of Tauranga, and The Elms board member, Stuart Crosby says The Elms had previously taken a neutral stance on who was gifted the section and confirmed a letter was sent to council on May 20.

"We had to consider the proposed agreement Tauranga City Council had drafted between Otamataha Trust, The Elms where they would own the land and lease it to us for $1 a year.

"Our trustees did resolve our first preference would be for the section to be transferred directly with our second preference being the proposed agreement."

He says he had seen the draft deliberation report and said to council staff the letter from The Elms was missing.

Stuart was also the mayor in 2006 when Council agreed to purchase the section at 11 Mission Street.

"The was always the expectation that it would go to The Elms," he says. "But it is a different time now."

An Otamataha Trust spokesman could not be reached for comment.

Council communications manager Aimee Driscoll says a staff report would be tabled at the September 17 council meeting to provide more information to councillors.

"Between now and then we are engaging and having discussions with iwi and The Elms," she says.

-Stuff/Matt Shand.
More on SunLive...
5 Comments
You must be logged in to make a comment. Login Now

Once again a local council hs made a decision concerning land that is at the moment, belonging to all Tauranga rate-payers, this is not about if this is right or wrong, should it be given back to Maori, or, not, this is about the change in local Gov’t, from making sure the rubbish is picked up and local infrastructure, now we have whoever has managed to get voted in making social and racially-based decisions that we will live with forever, the likes of Andrew Judd and Steve Chadwick have changed the perception of local Gov’t forever, please, think about it, what gives these people the right to even think about issues like this, this should be done through public and proper legal representation, and just for the record I think this land should go back to local maori. People who act like ’god" have no place on council,

This is a travesty for the ratepayers in this city where the majority of us did not want this land gifted.

So who was responsible for not including this info regarding the letter dated 20/05 on the briefing? Yet again another stuff up. Roll on 12th Oct!

This is disgusting, of course The Elms Trust should get the land. There should be a full disclosure on this matter, those who voted to gift the land to the Otamataha Trust are not worthy of your vote in the upcoming local elections.

So rate payers purchased the property with the view it would go to the Elm trust. So why did the council to give away in effect our purchase. Wasting our money again. Can’t wait to vote them out !