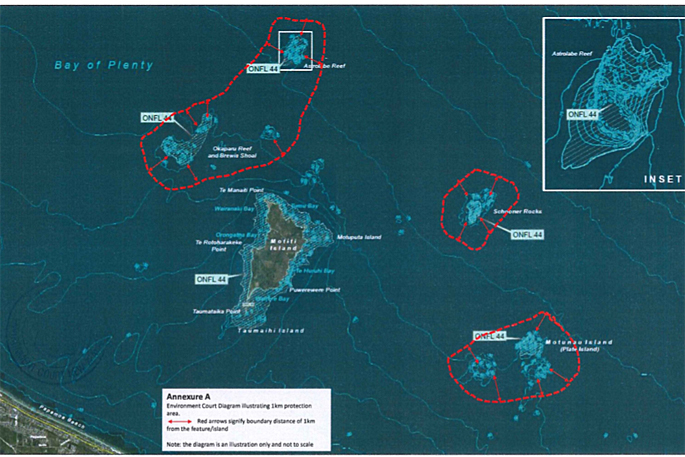 A Bay of Plenty Regional Council spokesperson says they are waiting for the Court of Appeal to inform the Environment Court decision about this proposal.

At this stage they have only issued an interim decision and they can’t provide comment until the final decision is released.

The court document obtained by SunLive is an interim decision in the matter of the Resource management Act 1991 and appeals under clause 14 of the First Schedule to the Act.

The document states, the Court concludes that on an interim basis changes to the Regional Coastal Plan are appropriate as follows:

The damage, destruction, removal of flora and fauna within the three Marked Areas of the Motiti Natural Environment Management Area in the Bay of Plenty proposed Regional Coastal Environment Plan shall be prohibited.

The imposition of controls within the balance of the MNEMA, in relation to fishing methods that may damage the seabed or where they impact on sea birds or other marine mammals, shall be part of the investigation and reporting undertaken.

This decision is subject to the appeal on jurisdiction being resolved; and the wording being finalised.

The proposal is currently with the Court of Appeals and SunLive will report further once a final decision has been reached.

While I do support looking after the fisheries I am more in support of local recreational fishermen/women. These moves seem to be more about forcing people to buy fish from the supermarket. How about scaling back the commercial fishing businesses which have been exposed as wasteful and often criminal! Fish dumping etc. For the betterment of the local fish stocks!

That’s it may as well ban fishing. Boats for sale. f*sh**g , ski boat for sale !

Time to sell the boat

I do like the marine reserve concepts,but wow that’s some of our best offshore reefs off limits.how about no seine netting in bay waters and try and get our once great kahawai stocks back