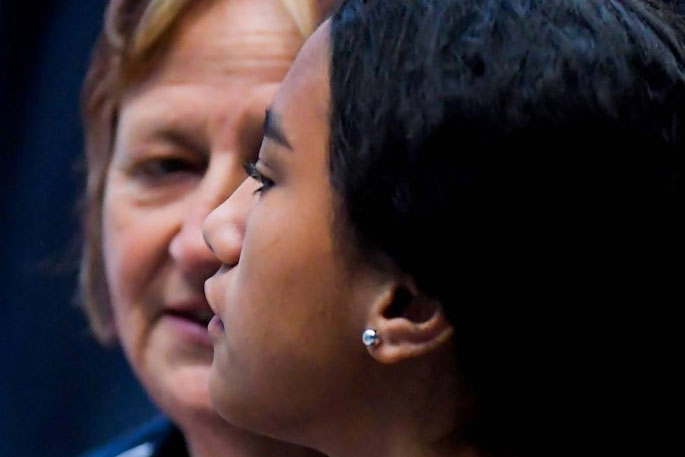 Hearing-impaired Whakatane teen Brooklyn Taitimu has two secret weapons in her quest for rock-climbing success – an FM frequency machine to help her hear, and a phenomenal coach who believes Brooklyn is limitless.

This year, although she isn't a rock-climber herself, Kara has brought 19 climbers to the six-day Anchor AIMS Games in Tauranga - but Brooklyn faces a steeper challenge than most.

"I think Brooklyn teaches us about not letting anything stand in the way," Kara says. "About giving things a go that you want to try and really getting stuck in and doing your best. She doesn't see any barriers in her life."

Brooklyn, 13, is completely deaf in her right ear and severely deaf in her left ear. The little she can hear sounds like a very muffled radio. When the buzzer sounds to start her race, Kara lifts her hand off Brooklyn's shoulder – and the wispy teen is off.

Brooklyn's mother, Ngaire Swanson, says her daughter started climbing only this year but she already looks comfortable on the wall: "She's more herself in this sport than any other sport she's played."

Brooklyn has a device fitted in her ear which can pick up her coach and teachers' voices when they speak in to an FM frequency box around their necks.

She has sign language training every week and will be fluent within two years – but sign language is no help when you're picking your way up a vertical wall at speed.

Rocktopia owner Carla Blockley says Brooklyn is a precise climber – perhaps because she can block out the noise of the crowd and the buzzers.

But Blockley says Rosey Kara is also an extraordinary member of the rock-climbing community for her commitment to the kids in her care.

She hugs each of them before and after every climb, yells their names loudly as they scale the rock walls, makes sure they are fed, warm, adequately trained, and have all the necessary gear – whether their families can afford it or not.

Kara works in the Whakatane Intermediate bilingual unit, alongside her teacher aide husband Mike, also a key supporter of the rock-climbing team. 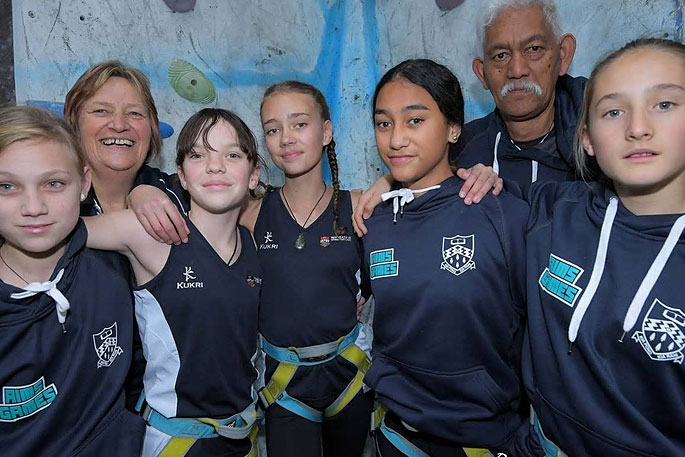 Kara says it's the kids that keep her wanting to coach sport.

"Kids at this age are open to everything. I just want to give kids enjoyment."