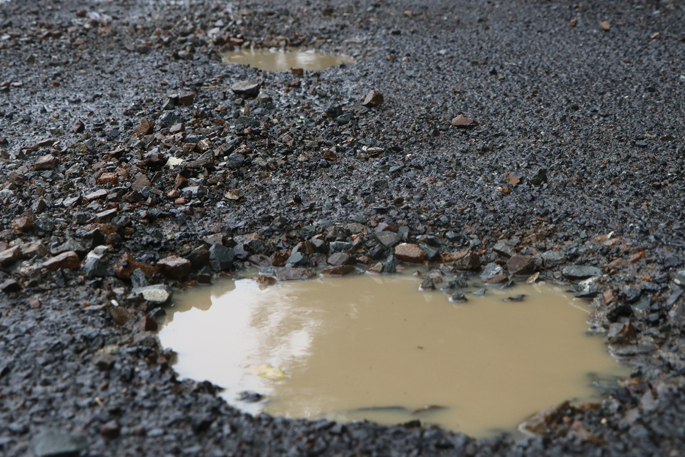 Frustrated motorists are out of pocket after hitting a substantial pothole on State Highway 2 between Bayfair and Baypark.

Dean and his wife Gayleen’s car was damaged last week when they were returning from Tauranga around 9pm.

“There was a pot hole that in the dark and in the rain we couldn’t see. Our car hit it and consequently damaged 2 rims, it didn’t blow the tires out but we had to replace those,” says Dean.

It was between Exeter St and the State Highway 29 roundabout on the older section of road, he says.

Dean didn’t think the pot hole was very big but it seemed quite deep from the impact.

“I didn’t actually see it to be honest but we certainly felt it. That’s for sure.”

He says they pulled up in the slip lane on SH2 heading toward Papamoa and there were 7 or 8 cars pulled up with similar damage.

The cost of repairs and a wheel alignment was around $500, he says.

Dean followed up with the contractors in charge repairs for the road to see if they would provide compensation for the damage.

He was told he wouldn’t get compensation because the company’s policy is they have 24 hours to respond and the pothole was identified around 8pm and was repaired by 10 or 11pm.

“It was too late for us, they’ve responded within their time frame. There was virtually no conversation, meanwhile we’re $500 out of pocket for two new rims, two new tires and a wheel alignment.”

Dean works in road construction so understands that potholes can just happen.

“Compensation would be nice, but it’s a hard one to sort of predict when the rain comes potholes appear.”

“There’s not much you can do about it doesn’t matter how good you maintain things just one of those things it’s unfortunately.”

“They probably should have been a bit more proactive especially on that old part of the pavement.”

“The amount of traffic using it, I think they should have done something about it before it got to this stage.”

“It’s one of those unfortunate things, there was a lot of other people out there with similar damage.”

“We have received several reports following the pothole last week, which was a result of heavy rainfall and was repaired in a timely manner at the first available opportunity, he says.

“A temporary fill is usually carried out first and a more permanent repair is scheduled for drier, warmer weather conditions.”

John says potholes are more common on roads where there is higher traffic particularly trucks, and they tend to appear more often in winter when there is higher rainfall.

“Driving on any roads, and in particular roads through a nominated work zone will never be completely risk-free and will always require drivers to be vigilant and aware of the changed road environment.”

“We understand the frustration that these incidents cause for motorists, and our contractors patrol highways and project sites daily to monitor for the appearance of potholes so they can be filled as soon as possible.”

If people have experienced damage to their car as a result of potholes they should speak with their insurer first, he says.

The NZTA also urges people to get in touch soon as possible if they spot potholes or other problems on the road on 0800 44 44 49.

Our roads are appalling. Pothole patches falling apart everywhere. 17th Ave between Fraser St and Cameron Rd is like driving with off-center rims. I’ve rung TCC many times re potholes and nothing changes for weeks if even at all let alone 24hrs. Clingon is right, we pay top dollar tax wise for these roads. It’s time to front up with our money TCC and NZTA and fix our roads. All you do is keep shifting the blame to each other. Forget about all these bus lanes for empty buses to use and blocking our roads with dangerous cycle lanes. Fix our roads properly or start paying for the damage your causing to vehicles. What if a motorcyclist hits these . . .

Sounds like a case could be made here for damage not covered by insurance or the cost of the excess.

The people building this preach for safety but don’t really give a hoot about anyone else. Pretty poor attitude as the pothole was likely caused by their substandard works. The newly constructed lanes are bumpy and a terrible ride. NZTA should be embarrassed as it shows they have no control or provide any leadership.

Our roads are very poor quality. Bumps and holes all over. Show me a man hole cover that fits flush with the surface. The hole on the bayfair roundabout is now a hump. We pay an incredible amount of tax on every litre of fuel that we buy, where are our nice smooth roads?

Your lucky it was only $500. I hit a pothole in Tga that chipped & warped x2 mags front & back and these were staggered type. They no longer make the mags anymore either. Try $2200 for new mags, plus tyres on top. No one cares!

With the technology available today potholes should be able to be seen and fixed within an hour. Employ three people on 8 hour shifts checking roads on remote live cameras etc etc.