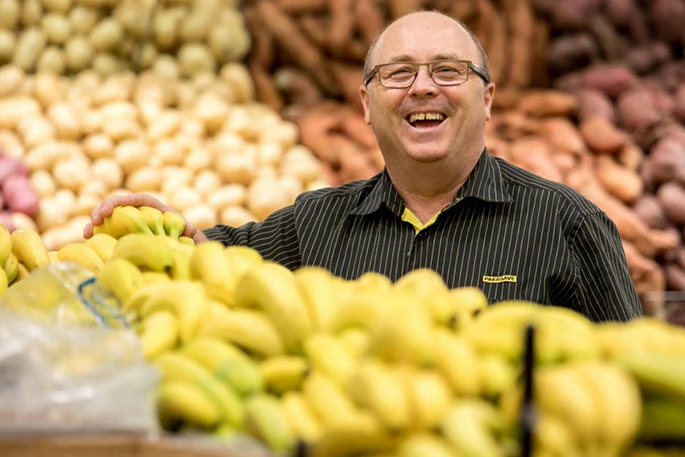 A record turn-out for this year's Anchor AIMS Games is seeing city motels stocking up on toilet paper and coffee carts being loaded with beans, while the city's supermarkets buy extra pallets full of curved yellow fruit.

Papamoa Pak n Save store manager Glenn Macdonald has increased his weekly banana order by a tonne to cater for the scores of grubby-kneed football teams, the swimmers, sailors and other athletes who arrive each day in search of healthy snacks.

"During a rush, we'll have one person in produce and almost half their job is just filling up the banana bins," says Glenn. "We'll probably run out of bananas every day at some stage."

Based on last year's hot ticket items, the supermarket has brought in an extra tonne of potatoes, too. And plenty of poultry – last year's chicken drumstick sales jumped by 3.5 tonnes during AIMS week. Butter, oranges and packets of spinach leaves were other big sellers for the store.

The winter tourism boom is built around intermediate school children and their accompanying coaches, managers and supporters. They collectively represent more than 365 schools from throughout New Zealand, Asia and the Pacific, competing in 23 sporting codes.

"It's great to see the kids in here and we definitely enjoy having the extra business at what would otherwise be a reasonably quiet time of year.

"We have whole teams coming in on the Sunday it starts, buying a whole week's worth of food and lots of snacks, lots of apples, lots of yoghurt pouches. Then they'll come in during the week in their sports uniforms and top up on snacks, clean out whole shelves of trays of drinks."

Tourism Bay of Plenty's head of destination marketing Kath Low says the games provide a significant, week-long tourist boom at what is traditionally a quiet time of year.

A Tauranga City Council-commissioned study will measure the economic impact of the 2019 event later this year.

"In the meantime, we can make some educated guesses," says Kath. "Based on the games' growth, we'd expect that visitor spend will sit close to $3m. And they'll likely generate more than 50,000 visitor nights."

The last council survey, commissioned following the 2016 AIMS games, showed 9200 athletes and their entourages of coaches and managers and supporters spent $2.5m in this region and generated 47,500 visitor nights.

Since then, athlete numbers have increased by 25 per cent, to 11,500 athletes for this year's games.

"The flow-on effects are felt right through the community as these people fill all our motels and hotels and holiday parks and a lot of private homes, they buy lots of food and coffee and take the team to the movies or out to explore our beautiful region."

She said hundreds of thousands more were spent in this region to stage the event.

"On top of that, there is absolutely no doubt this event brings people back to our area from around New Zealand and overseas.

"I'm from Christchurch originally and I personally know several families from there who came here for the first time when their children were competing and they loved the beach, the climate and the environment so much, had such a great time that they chose to come back and holiday. So the AIMS effect continues to be felt months and years later."

This week, though, Florent Vade is lining up his 15 staff to look after the six mobile Coffee Chic carts that will be dotted around the sporting venues. He expects to churn through 1000 litres of milk, buckets of marshmallows and up to 90kg of coffee beans.

"When we started doing AIMS 10 or 11 years ago, it wasn't as busy, there weren't as many people and it was much more manageable," says Florent. "Now, it's all about being really organised.

"But the atmosphere is great, everyone is friendly and all the kids are pumped up, that's what makes it such a great event to have in town."

He expects to sell about 8000 cups of coffee through the week but, on the final day of the tournament, his baristas are slammed with hot chocolate orders as coaches buy drinks for their team.

Down the road from Pak n Save supermarket, Papamoa Beach Resort has long since sold out of every bed in every room from six berth cabins to beachfront spa villas, to house 129 people.

"Yes that's a lot of sheets and a lot of toilet paper," says owner Bruce Crosby.

The town is so full, some teams stay in Rotorua or other outlying towns and commute an hour or more to games. Many schools book into the resort a year in advance, including two from Auckland that has stayed every year for more than 10 years. Caravan and campervan sites are also taken up by the players' supporting grandparents and parents.

"It's just nice to help, to be a host when you have so many people in the area," she says of her decision to break out the bubbles for grown-up females who venture into her store during the week.

"I love the AIMS Games, it's such an amazing thing for our community and these kids. And it's a massive week for these women who are managing or coaching. Lots of them have taken a week off from their jobs and it's not exactly a holiday. There are 20 people crowded into a four-bedroom home, sometimes there's no dryer, it's raining the whole time, my idea of a nightmare. Hats off to these women and the men too.

Rodelle says her celebratory approach to the event is less about selling clothes during the week – most women are too busy to buy - and more about laying out the welcome mat for future return visitors.

"People are buzzing. They come in here and say they didn't know there were so many cool restaurants and places to go here. They're seeing how beautiful our town is and the beach. A lot of them will come back here.

"They're just super, super positive about the area. Well, apart from one group, when their kids had lost."