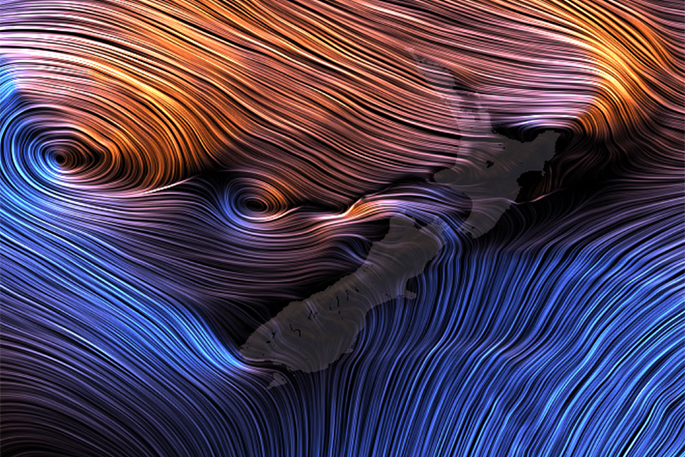 Mild winds Vs Cold winds - 12 Noon Sunday: the brighter the colours the stronger the wind / Maps with thanks to Majicweather.com

WeatherWatch reports that New Zealand has a complicated set up today with a fairly bitter cold change moving up much of the eastern side of both islands - but it's being caused by a high, not a low. Instead, the low in the Tasman is the culprit for the warmer than average day coming up for the top of the country.

The West Coast is probably 'the place to be' with mostly sunny skies, at least from Greymouth southwards, and a dry and mild Sunday on the way. It will also be a little warmer than average here too.

Northland and Auckland and some parts of Waikato and Coromandel Peninsula are the warmest regions today thanks to a large low in the Tasman Sea feeding in mild air from north-west of NZ. Some places will be in the late teens and we may even see 20 degrees reached. This same Tasman Sea low has brought a windy, cooler, weekend to some parts of Australia including Sydney but for now northern NZ has the warmer side of it.

A high south of NZ is pulling up a fairly cold southerly. The entire eastern side of New Zealand from Southland as far north as Gisborne and East Cape will be below normal on Sunday by a few to several degrees with many places having highs in single digits. This cold air will just feed into parts of south east Bay of Plenty and possibly Waikato but further north from that it's a much warmer air flow from the opposing direction, out of the north Tasman Sea. These two air masses meet around the central/eastern North Island which is where winds will be lightest - but it will likely be cloudiest too.

With this colder than average southerly moving in we have to remember it's not being caused by a low, it's being caused by a high south of NZ. This means as we go into night the winds are light, the skies are clear, the southerly fades away and that cold air sinks into the valleys.

Inland areas of the South Island will be coldest, like Queenstown, Central Otago, and Canterbury plains. Frosts may be widespread through inland parts of the South Island with -2 to -5C possible in communities throughout the mountains like Queenstown, Wanaka, Alexandra and Tekapo, and -1 to -3 lower down into the plains - give or take a degree or so.

The North Island is milder due to cloud, rain/showers, warmer winds and/or windier weather at night but it will still be fairly cold night for many - but not with the same frost risk.

Cold air mixing with warm air in the North Island means there may be some heavy snow in the Central and Eastern North Island ranges in the days ahead, not just today. The Desert Road may get a dusting. The South Island ranges have snow too, heaviest falls in the north.

There could be a few very light isolated low level snow flurries into Canterbury, mostly North Canterbury, for a time on Sunday morning. These are very isolated and won't accumulate too much. Heaviest falls will be higher up in the ranges. 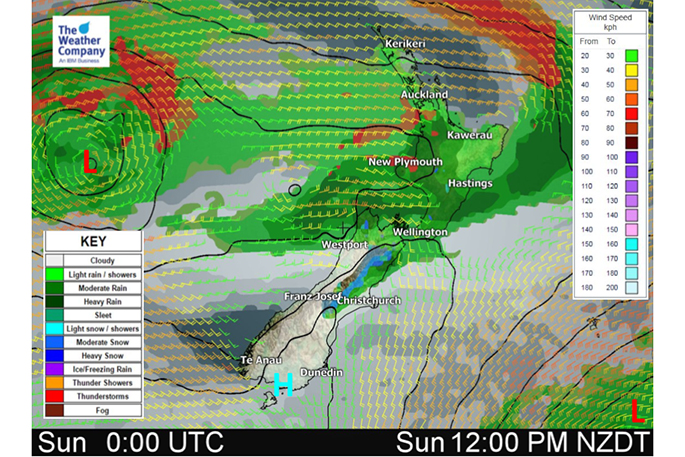