Jan takes the 70 to town 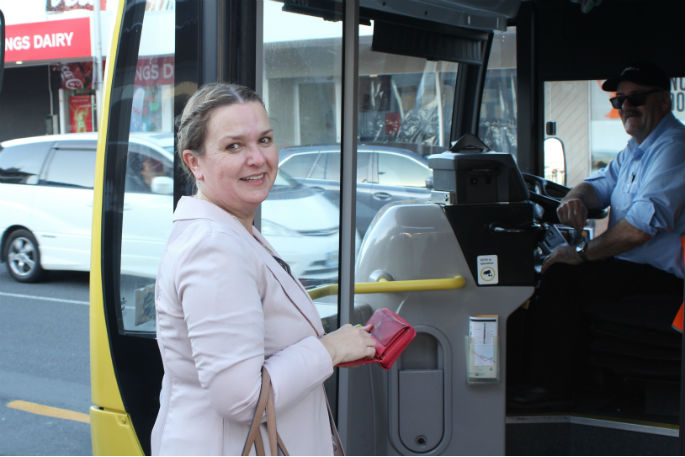 $2.72 thank you! The MP joins the punters from Willow Street to Matua on the 70. Photo: Dan Hutchinson.

She’s probably entitled to a parliamentary services taxi chit, or she could drive the very recognisable and appropriately red Mitsubishi Lancer with the Tinetti livery into town.

But the Tauranga Labour MP now prefers to mix it with the hoi polloi and take a ‘big yellow’ when she’s in Tauranga on electorate business every couple of weeks.

“Why not take the bus?” asks Jan Tinetti. And there’s no good reason why not.

And that’s much cheaper than parking.

“I would pay double the cost of a return bus trip for the convenience of parking in the city.”

She caught a bus, route 70, in Matua at 9:15am, was in town 15 minutes later and by 10am she was sitting in the sun at the bottom of Wharf Street drinking green tea and ready for her first appointment with The Weekend Sun.

Sometimes she would spend 10 minutes driving around the CBD looking for a carpark. But today no stress, no pressure.

“Even if we use the bus every now and again, then we, the consumers, are putting pressure on the service to be a better service.”

And that’s a good place to be.

The Labour MP is not only being practical, she is sending a message.

Then, she says, there would be a critical point when things change over, like everywhere else in the world, and then Tauranga would have a great and reliable public transport system.

“But I think it’s important we start making that shift. And if we all did it, what a difference we would make to the service.”

She’s heard all the stories about empty big yellows flying to all points of the city, late services and services that don’t happen at all. But that’s not her experience.

“Great views on the bus and the driver was an amazing, beautiful, friendly person. Happy to see everyone on his bus, individual conversations, making everyone feel good about themselves.

“It was nice watching those interactions. Loved it.”

She also points out the half empty bus was also half full. About ten people were getting on the bus around her stop in Matua and by the time they got to town there were about 20 people aboard.

“And I utilised the time to make two phone calls and set up two appointments. So you could weigh it up whether sitting on a bus is time lost or time gained.”

And after all parking is never going to be easier downtown.

And one of those big yellow options is already up and running.

“Try it, you might like it,” says the MP with a concession card. And she insists it is a good look for an MP to be using a bus.

“Of course it is. We are saying we have these services and we should be using them.