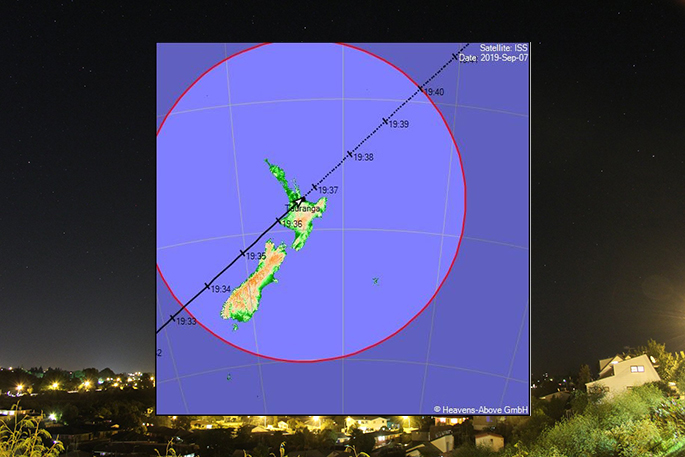 The International Space Station will be passing directly over Tauranga tonight from 7.33pm. Image: Supplied.

The Tauranga Astronomical Society has advised that weather permitting, the International Space Station – ISS - will be visible tonight.

“The ISS will be passing directly over Tauranga from 7.33pm on Saturday evening,” says Dave Greg, a member of the astronomical society.

“ISS will rise in the south west at 7.32pm. By 7.33pm it will have reached 10 degrees altitude above the south western horizon and will be visible as it moves upward from the horizon.

“Between 7.35pm and 7.36pm, ISS will pass to the right of the Southern Cross. ISS will have passed 45 degrees altitude angle by 7.36pm and will then quickly reach its maximum altitude angle of 90 degrees straight up as it then disappears into the shadow of the Earth.

“ISS may appear to change from a bright silvery colour to orange/red as it enters the shadow due to the sunset effect.”

Dave says that the ISS will be approximately 425 km away from Tauranga when it is directly overhead.

“ISS takes only 92 minutes to orbit the Earth, travelling at 27,600 km per hour,” says Dave. “You might like to set a reminder alarm on your phone.”

Recent scientific studies conducted on the International Space Station include growing crystals and moss in space and studying how microgravity affects fluids in the body.

The space station provides a platform for long-duration research on how living in microgravity affects the human body and testing technologies for traveling farther into deep space, which supports Artemis, NASA’s plans to go forward to the Moon and on to Mars.

This last week, the crew on the orbiting laboratory took microscopic images of solutions and crystals in the wells of experiment growth plates for the Microgravity Crystals investigation. This experiment crystallizes a membrane protein that is integral to tumour growth and cancer survival. Efforts to crystallize this protein on Earth have yielded unsatisfactory results, but previous research indicates that crystals grow more successfully on the space station. Large, well-ordered protein crystals can provide detailed knowledge of the three-dimensional structure of proteins. Results may support development of cancer treatments that more effectively home in on their intended target, producing fewer side effects.

The crew have also been measuring how fluid shifts affect vision and eye structure. This investigation measures how much fluid shifts from the lower to the upper body and in or out of cells and blood vessels in microgravity in an effort to determine how these shifts affect fluid pressure in the head, vision and eye structures. The experiment also measures response to a technique of subjecting the lower half of the subject’s body to slightly lower pressure, which creates enough difference in pressure to draw fluid from the head toward the feet. This procedure, called lower body negative pressure, could help mitigate some of the effects of space flight-induced fluid shifts. Astronauts can experience vision and eye changes during and after long-duration space flight and study results may lead to development of ways to prevent these effects. 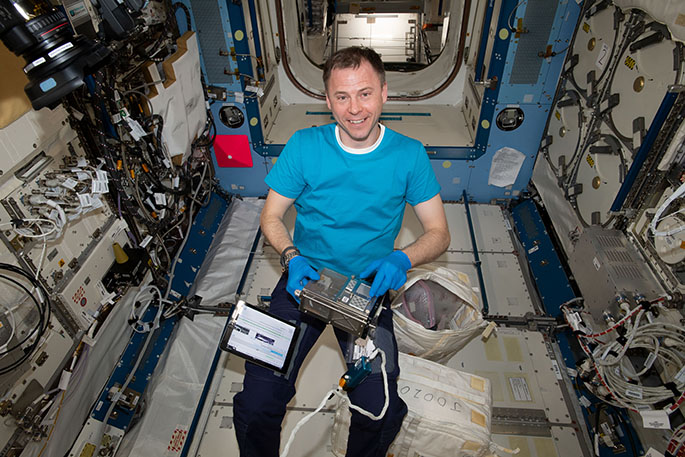 NASA astronaut Nick Hague works on hardware for Space Moss, an investigation that grows mosses aboard the space station to determine how microgravity affects their growth, development and other features.  Photo: NASA

Growing tiny plants in space has been another feature of this week’s science conducted on the ISS. This investigation determines how microgravity affects the growth, development and other features of moss. Tiny plants without roots, mosses need only a small area for growth, an advantage for their potential use in space and future bases on the Moon or Mars. 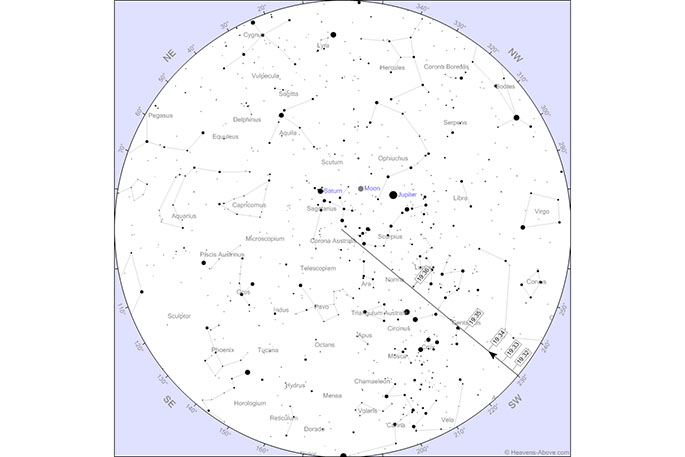 A sky chart showing the route of the ISS tonight.

A sky chart showing the route of the ISS tonight may appear to seem flipped, as it shows east on the left and west on the right. This is because it is meant to correspond to the sky over our heads, and not the ground under our feet, as a map of the earth would usually appear. To use the sky chart effectively, imagine holding the chart above your head to use it, and then the directions are correct.

The next public meeting of the Tauranga Astronomical Society is on Tuesday September 10 at 7.30pm. Entry for adults (non-members) is $5, children are free.

Thank you so much Sunlive. We got to see the International Space Station in orbit. So exciting. Thank you again.

must go outside and wave to the astro nutties