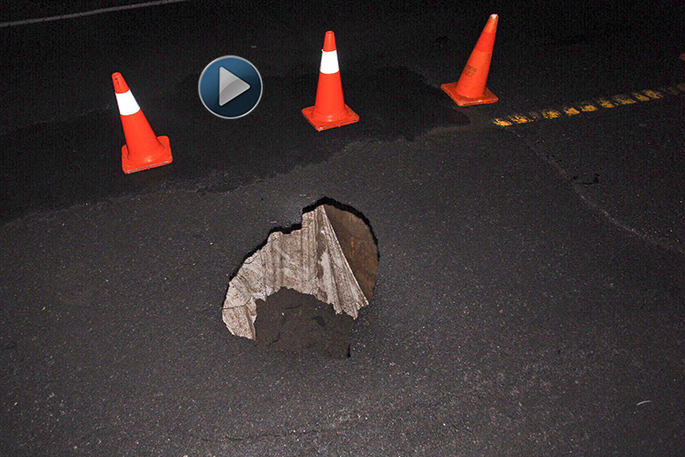 Oropi Road, near the State Highway 29a roundabout, is closed morning after a sinkhole on the bridge has reopened.

In a statement released last night, Tauranga City Council says Oropi Road, south of SH29, had been reduced to one lane between Cheyne Road and Oropi Stream Bridge due to a sinkhole reopening.

The sinkhole which first opened up 31 July 2019 had temporarily been fixed, says a council spokesperson.

"However, is believed the recent rain, combined with increased streamflow and the high tide has caused the temporary repair to partially erode.

"Geotechnical engineers will assess the site this morning and we will provide updates when available."

I too have reported that same hole and got exactly the same fob off. I guess we’ll have to wait for some poor motorcyclists get killed hitting it. Let’s hope this so called Council are as temporary as the patched up roads.

O dear, so engineers were employed to oversee temporary repairs, but didnt take into account high tides, increase rainfall, and higher stream currents. What a bunch of muppets. Make them redo it, at their cost, and pay for the repairs. Any other industry would.

Try this one.Traveling North on Cameron Road and doing a left turn into 15th Ave.A hole has been there for about Two years and been patched and Patched again Many times.It is around a Man hole waiting to sink below road surface.I have reported it many times.Answer.We will have to find out if it is Our fault or national roading.I ask you?but we hopefully have a decision to make soon about some of these people