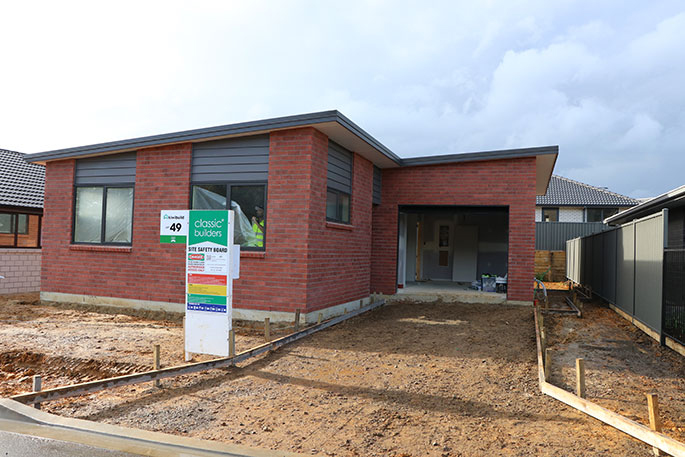 One of the Kiwibuild homes in the Bay of Plenty. File Image/Sunlive.

KiwiBuild's 100,000 homes target has been scrapped and will not be replaced as part of the Government's sweeping project reset.

A reset of the affordable housing policy unveiled on Wednesday makes major changes, including a $400m progressive ownership scheme for up to 4000 families and a shift for wider support for first-home buyers, so buyers with as little as a five per cent deposit will be eligible for Government-backed loans and grants.

The reset of the troubled policy sets no targets for numbers of homes built, instead promising a "significant" number of new affordable homes, with monthly dashboards published to keep the public informed.

Housing Minister Megan Woods says the 100,000 target was overly ambitious and had led to "contracts being signed in places where there was little first-home buyer demand".

"[The targets] have actually driven perverse outcomes. KiwiBuild is a lever, not an outcome," Megan says.

While the price caps and income criteria generally remain the same, much of the programme has been transformed.

Buyers of studio and one-bedroom homes will only need to commit to owning them for one year, instead of three years as originally set out.

Up to 10 per cent of KiwiBuild homes in each development will be allowed to breach the price cap if they have four or more bedrooms.

"Second-chancers" - people who have owned a home, but have lost it through something like a divorce - will not have to meet an asset test, but will still have to meet the KiwiBuild income test.

People who need to move for jobs such as teaching into high house price areas like Auckland will also be eligible for KiwiBuild, providing they had sold their first homes.

More than 460 KiwiBuild homes in Wanaka, Canterbury, and Te Kauwhata that were not selling or are not expected to sell as KiwiBuilds will be sold on the open market so money can be recuperated to keep pushing ahead with developments where there is stronger demand.

The Government has around $207m in equity built up in those properties but has not taken a "haircut" selling any of them - yet. Megan was confident they would all sell for the price the Government had paid for them.

The Government underwrite will also be shifted so 100 per cent of the price will no longer be guaranteed, meaning developers will have more of an incentive to sell KiwiBuild homes.

$400m for rent-to-buy and other progressive ownership schemes:

Some $400m of the Government's $2b allocation for KiwiBuild has been set aside for a new progressive ownership scheme which the Government believes could help up to 4000 renting families into homes.

This could take the form of a "rent-to-buy" scheme where low and middle-income buyers without a deposit are able to pay a discounted rent until they are able to come up with a deposit.

Shared equity is also being looked at, which would allow buyers to buy properties in partnership with the Government, which would own part of the property.

This policy was promised as part of the Confidence and Supply Agreement between the Green Party and Labour, but has largely languished, and remains unfinished despite the nine-month reset process.

Green Party co-leader Marama Davidson says saving for a deposit was unachievable for many people and she wanted to change that.

"$400 million will deliver meaningful change for the people who are locked out of home ownership by high rents and low wages."

The Government expected between 2500 and 4000 families would get into homes with the scheme over four years.

As part of the reset the Government has completely changed the way wider supports for first-home buyers operate.

The Welcome Home Loan and HomeStart grant, which allow buyers to get Government-backed loans and $10,000 grants for deposits in certain circumstances, have been transformed.

Both policies will now allow first home buyers to buy houses with a deposit of just five per cent instead of ten per cent.

This means groups of three or more people will be able to pool their $10,000 deposits on properties at any price.

All KiwiBuild homes are eligible for the policies.

Labour's KiwiBuild plan was born in 2012 and announced by then-leader David Shearer.

The plan survived several leadership changes and was one of the main planks of Labour's election campaign in 2017 - 100,000 affordable homes over 10 years, with half in Auckland.

But it has foundered since the party came to Government, with just 258 homes complete by September, well below the 1000-home goal for the first year of the policy.

Many of those homes have yet to be sold, with some homes on the market for more than six months.

Another 537 are currently under construction, 1993 contracted, and 8000 forecast.

The failures of the policy saw then-Housing Minister Phil Twyford begin a "reset" process in January, but he lost his job to Megan Woods before delivering on it.

When announcing that reset both Phil and Prime Minister Jacinda Ardern were adamant the 100,000 target would remain.

Megan says the target had led to the failures seen so far.

"It was overly ambitious and lead to contracts being signed in places where there was little first home buyer demand.

"Instead of the target, we will focus on building as many homes as we can, as fast as we can in the right places. Each month we will release a dashboard of housing statistics so New Zealanders can easily measure our progress."

National housing spokeswoman Judith Collins says KiwiBuild had been scrapped in all but name.

"It's pretty easy to achieve targets when there aren't any, which appears to be the Government's strategy on housing. This shouldn't surprise given how averse it is to setting measurable targets in other areas like health and education," says Judith.

"New Zealanders who dream of home ownership will feel justifiably let down by the KiwiBuild reset. The three key elements are gone – there's no 100,000 homes target, price caps have been loosened and the asset test for 'second chancers' is no more.

"There were no new initiatives to speed up the delivery of houses. All we got from the new Housing Minister was a commitment to try harder. What are prospective first-home buyers supposed to do with that? It's meant to be KiwiBuild, not KiwiHope.

"For months I questioned whether the Government had robust processes in place to ensure houses were being built where there was need. Megan Woods now admits that wasn't the case and the taxpayer has underwritten $200 million worth of houses that can't be sold."

Judith says Megan was being "hopeful" that the homes would all sell for as much as the Government paid for them but "hope does not pay the bills."