An injection of life for Tauranga tot 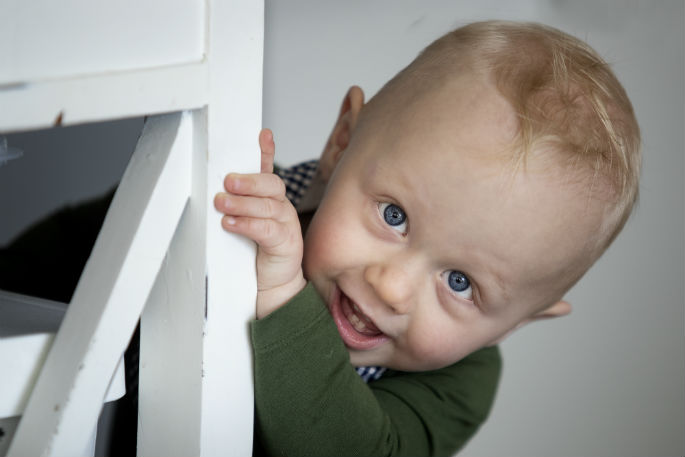 One-year-old Tauranga toddler Richie Morris will require regular blood transfusions for the rest of his life.

Tauranga toddler Ritchie Haden is only one year old and has already had 20 blood transfusions since birth.

Ritchie is the only person in New Zealand diagnosed with his particular condition. It affects the body’s ability to make red blood cells, and Ritchie will require regular transfusions for the rest of his life

Ritchie’s mother Claire Haden says she has a real appreciation for people who give blood, because those donations keep her precious boy alive.

“If people weren’t donating blood, we wouldn’t have our son here today. We wouldn’t have a blood match for him, and he would eventually get so low his organs would shut down.

“It means the absolute world to us that people donate and they do it as much as they can.

“He has had 20 transfusions over the past year. He had his 20th one just before his first birthday and is due for another one on Monday.”

Ritchie was given 55mls of packed red blood within the first two hours of being born. He was then immediately flown to Waikato Neonatal Intensive Care Unit where he received multiple platelet and blood transfusions.

At eight days old, Ritchie was helicoptered from Waikato to Starship Hospital in Auckland for further treatment.

He now gets blood transfusions every four or so weeks at Tauranga Hospital.

Claire says Ritchie is doing amazingly well considering everything he has been through over the past year.

“We thought for a while that we may not be able to bring him home, so we are thrilled with how far he has come and how well he is doing.

“Earlier on he couldn’t hold his head properly, he was lethargic and always quite cold. Now he doesn’t get as symptomatic - but he gets tired quite quickly, sleeps a bit more and still gets a bit cool in the hands and feet.”

She says within a few hours of Ritchie having a blood transfusion, he is like a completely different boy.

“It’s such a big difference within just a couple of hours – colour comes back into his face and he doesn’t need to stop and rest as much.

“The day is always really long and hard for him, but you can see he feels so much better afterwards.”

Fewer than four people out of every 100 donate blood in New Zealand. There are 4319 active donors in Tauranga.

New Zealand Blood Service is teaming up with Sir Graham Henry in calling for 100,000 new blood donors across the country.

NZBS CEO Sam Cliffe says since 2016 the need for plasma has increased by 38 per cent and is forecast to grow.

“This year alone we need to collect over 70 tonnes of plasma. Relying on just four per cent of our population to ensure lifesaving blood and blood products are available for all, is no longer feasible.”

He is the only person in New Zealand with the condition although there is a man in Wellington who has the Type 1 version.

For more information and to get involved with the cause, visit: www.jointhebench.co.nz