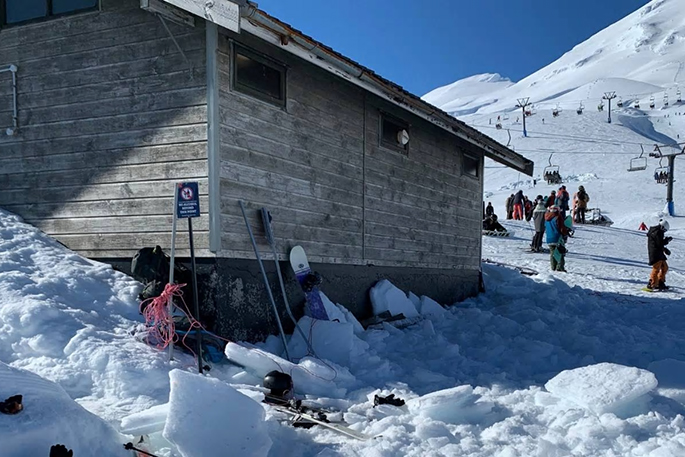 Slabs of ice 20-centimeters thick came down on the five skiers. Photos: Supplied/STUFF

Five people were injured and three airlifted to hospital when blocks of ice fell on the group of skiers at the Turoa ski field on Saturday afternoon.

Three rescue helicopters were called shortly before 3pm on Saturday after ice fell from a toilet block onto a group of skiers, a Greenlea Rescue Helicopter spokesperson said.

Members of the group received head, leg and pelvis injuries and "they were all in serious pain".

Ruapehu Alpine Lifts Limited owns and operates the Turoa Skifield. Its general manager JP Chevalier said this type of incident was rare, and the ski patrol staff had spent the weekend reviewing all other buildings and snowfall hazards following the incident.

"After heavy snow in recent weeks, snow accumulation on buildings was identified as a potential hazard and warning signs and ropes put up by ski patrol staff as a precaution."

Other measures were in place to keep skiers safe around buildings during periods of heavy snowfall, Chevalier said.

Anthony, a skier on the mountain who didn't want his last name used, said he was eating lunch with his family when he heard an "almighty crash".

"All these people were gasping. A big slab of ice and snow had slid straight off the roof and landed on about five people," he said.

Dozens of people ran to the toilet block and started digging the skiers out of the ice.

"We started pulling slabs of ice off and we found a woman buried under there. Another lady was lying down and you could see blood on her face.

"I recall seeing quite a small Asian lady, she had a slab of 20-centimetre thick ice just lying on top of her. These guys pulled it off her and her leg was bent back, looking pretty sore."

Anthony said snow appeared to have accumulated on the roof of the toilet block over the past couple of weeks.

It was a sunny day on the mountain on Saturday and the snow had melted over time and slipped off the roof, he said.

The force snapped a big piece of timber that was part of the roof framing. In the fallen ice, Anthony found a ski that had been snapped in half.

"It was carnage. We were all in shock at first."

He said there were cordon ropes around the area, which looked to be set up to stop people from going under the ledge.

"The angle the snow came off on was never going to stay within that cordon." 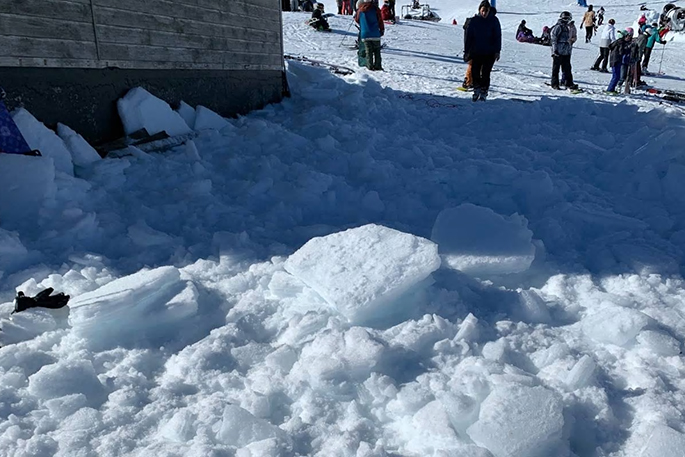 A relative of four people injured in the ice fall, New Zealand First list MP Jenny Marcroft, said her sister was in Whanganui Hospital undergoing surgery on a broken leg on Saturday night, along with a niece getting an x-ray for a back injury.

Another niece suffered minor injuries, and a nephew received stitches to a head injury while still on the mountain.

"It was chaos. They had just stopped when the ice smacked them over. They were all hit in the head," says Jenny.

When the helicopters arrived, the patients had already been transported down the mountain to a medical centre, said the Greenlea Rescue Helicopter spokesperson.

Two people were airlifted to Waikato and one to Whanganui, each in separate helicopters.

A new $25m gondola, known as the Sky Waka, recently opened on the mountain.

Surgery in Whanganui Hospital - good luck with that.

ROOF pitch is FAR to shallow - the snow fall does not "flow off" before it builds up and basically turns into an "ice pack", that eventually drops off in a BIG BLOCK. UP the roof pitch to 45/60 degrees and the "snow/ice" pack will not build up. Check out the houses/buildings in the European alps !!