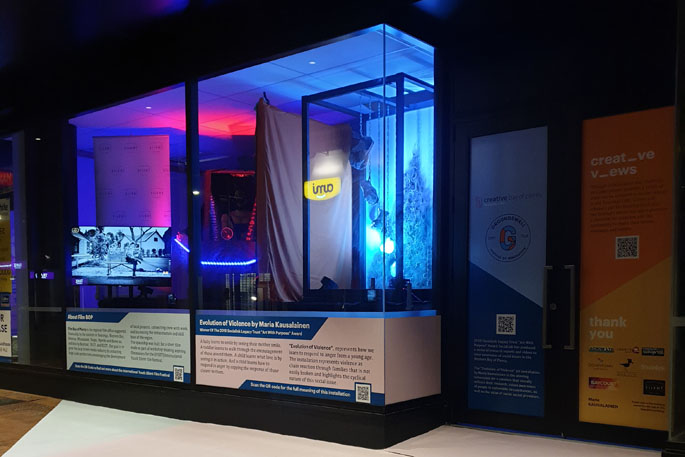 The window art installation in the Red Square at night. Image: Supplied.

A new window art installation has been installed in the Tauranga CBD, a project by Creative Bay of Plenty.

Over the past couple of years, CBOP worked with local creatives to display their work in their Willow Street front window, but since moving to The Kollective, Creative Bay of Plenty manager Meg Davis says they really missed their window and have been actively pursuing opportunities to continue this initiative.

“The initiative was well received by the general public, who stopped in their tracks to see the fortnightly new installations and, even more so by creatives, who booked out this window by eight months in advances, reflecting the high demand for creative spaces for display.

“The window provide a platform to profile, raise awareness and promote creatives works or upcoming events or exhibitions which were being held by organisations. We were delighted with the variety and thoughtful curation of the displays that went in.”

The ‘City Views’ window installation in the Red Square is a ‘pilot’ to showcase what can be achieved through fresh collaborations.

“The idea is a simple win-win scenario. The vacant space is re-imaged and showcased, while providing a platform for our creative community and hopefully, increasing our civic pride while our city is undergoing some growing pains.”

CBOP has been in discussion with Downtown Tauranga, Tauranga City Council and local creatives, with the desire to continue the pilot project.

“We hope to bring local business sponsors and space owners onboard to see this project continue. There are endless possibilities with regards to art installations, message and story telling, collaborations, workshops and pop ups, the list goes on.

“This project supports the vision for a more vibrant city in our arts and culture strategy, Toi Moana.

“Red Square was chosen for the simple fact that we had a wiling landlord and a prominent city space during the Groundswell period. We had a very limited budget and turn-around time to bring this window from concept to fruition.

“We have seen iterations of this idea previously, with Toi Ohomai students activating a vacant city space through ‘The Project Room’, and hope to work with the student cohort moving forward.”

BOP Film is one of the installations using the opportunity to promote their organisation and the upcoming International Youth Silent Film Festival which is being held at Baycourt on November 8-9.

“The Spaceship in the window is a prop that was built by Ramma Construction and the Alien created by Sandi Cutts for a youth workshop help by BOP Film in the school holidays preparing youths for their entry into the IYSFF. The film playing on the screen in the window is one of the films from 2018.

“The other installation s called the ‘Evolution of Violence’ and is the winning submission by Maria Kausalainen for the 2019 SociaLink ‘Legacy Trust Art with Purpose Award’ unveiled earlier this month at SociaLinks Research Launch.

“CBOP worked alongside SociaLink to demonstrate how we can articulate challenging social issues through creative expression.

“We are extremely grateful to those businesses who helped us make this project possible. A big thank you has to go to the landlord of the building for letting us utilise the space, Acrow Scaffolding for building the stage, Computer Style Signs for the signage, Baycourt, FilmBOP, Legacy Trust, SociaLink and Maria Kausalainen. These organisation donated their time and resources to bring this window to life.”

At the moment, the window display is static, but CBOP encourages people to view it at night when it comes to life with the lighting.

“We have had some difficulties with the window reflections, and certainly have some learning for the installations moving forward. We hope that future iterations of ‘Creative Views’ are interactive and participatory. There is plenty of interest from the creative community to activate these vacant spaces and open them to the general public,” says Meg.