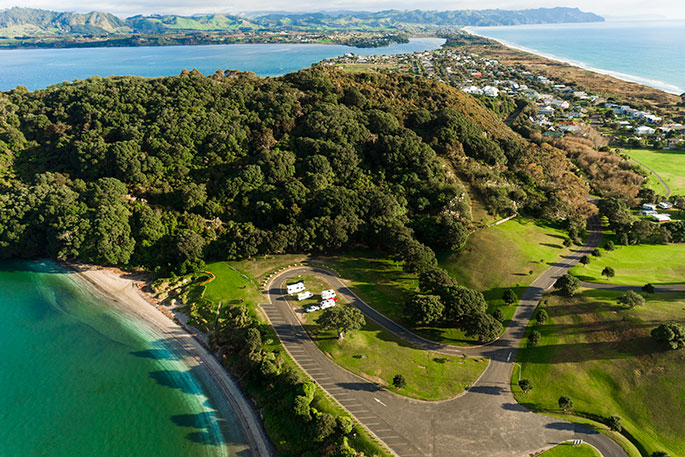 Overnight camping will be banned at Anzac Bay from September 30 as part of Western Bay of Plenty District Council’s approved bylaw review changes.

Freedom campers can no longer park up overnight at Bowentown’s Anzac Bay – under a number of bylaw review changes across the Western Bay of Plenty.

The new bylaw will come into effect from 30 September.

The overnight camping ban at Anzac Bay is backed by 71 per cent public support – across 78 public submissions during consultation – while the majority supported the other freedom camping changes proposed by Council.

Mayor Garry Webber says there has been significant public support in Council’s commitment to make the District’s popular coastal areas more pleasant for all holidaymakers.

“We take the public’s concerns and feedback seriously, and these comments directly informed the decision making process for us as a Council.

“The decision to remove Anzac Bay as a freedom camping area also pays respect to the fact that the Anzac Domain is an area of cultural significance.

“Last year Council leased land on Emerton Road in Waihi Beach to the New Zealand Motorhome Association – to provide an area designated for their members to enjoy their stay. This has reduced the level of demand to stay overnight at Anzac Bay.”

Council has also been working with the Ministry of Business, Innovation and Employment (MBIE) to provide amenities such as KiwiCamp and additional security monitoring to ensure freedom campers are abiding by the rules.

Council received $340,000 from MBIE to help manage freedom camping over summer. This has funded the installation of a KiwiCamp facility at Seaforth Road at Bowentown for this summer.

A full list of all the bylaw review changes can be found in Council’s decision document.