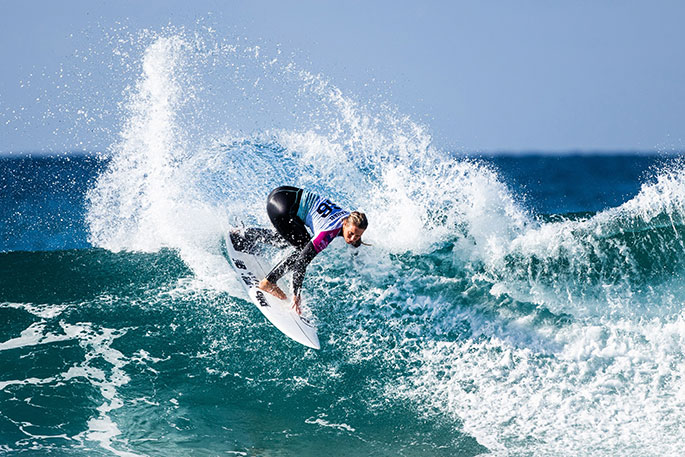 Paige Hareb in action at the Corona Pro in South Africa last month.

Six of New Zealand’s elite surfers have the remarkable opportunity to qualify for the Tokyo 2020 Olympic Games next week when they take on the best in the world at the 2019 World Surfing Games.

Surfing is being contested for the first time at the Tokyo 2020 Olympics in July and the event starting next weekend will see the top male and female surfers from Oceania qualify for the historic event.

The Olympic lure has seen the country’s best surfers sign up to compete including our two World Tour surfers – Paige Hareb (Tara) and Ricardo Christie (Gis).

Like our top Kiwi surfers attending the event, so too are the best of the best from around the world. They include the likes of Kelly Slater (USA), Gabriel Medina (Bra), Carissa Moore (Haw) and Stephanie Gilmore (Aus).

Approximately, 250 athletes from fifty countries are expected to attend the event this year, the event continually growing in participation as a result of surfing’s Olympic inclusion.

The International Surfing Association (ISA) World Surfing Games presented by Vans will be held at Miyazaki from 7-15 September.

Raglan’s Billy Stairmand goes into the event as the form Kiwi surfer having been busy contesting the World Qualifying Series this year. Only days ago, Stairmand finished fifth at a QS3,000 event in Virginia, USA propelling him up 15 places to 48th on the rankings.

It will be the first time that Stairmand’s teammates Ricardo Christie and Kehu Butler will compete at the event, both surfers having only contested the ISA World Junior Championships previously.

Christie has had a string of 17th place finished on the World Tour this year with some exceptional surfing on his behalf only being eclipsed by the world’s best.

This week he again finished fifth at the Tahiti Pro event at the hands of South African Jordy Smith, another surfer competing at Miyazaki.

Kehu Butler himself has had good recent form in Europe with a fifth place finish at the Lacanau Pro QS1500 in France. Butler has also competed in Japan once already this year and is the youngest male on the team.

Paige Hareb will be out to find another podium finish after placing second to Sally Fitzgibbons at the event in 2018.

Like Christie, Hareb has found herself hunting a big result on the World Tour after four consecutive ninth place finishes in the past few months.

Both Hareb and Christie will head from Japan directly to the USA to compete in the Freshwater Pro held at Kelly Slater’s wave pool as their next World Tour stop.

Ella Williams will be one of five Kiwis competing at the Pantin Classic QS10,000 in Spain starting on Monday with the event set to be a good warm up in the days leading into the World Surfing Games.

Mount Maunganui’s Raiha Ensor is the youngest of the female surfers and at 19 years of age, Ensor is spending her second year at Waikato University as a Sir Edmund Hillary scholar. Ensor has been part of the team for the past three years.

Hosts Japan will be out to defend their team title they secured in 2018 when they were led to gold by local hero Kanoa Igarashi. New Zealand placed ninth overall in 2018.

The 2019 New Zealand Surfing Team is as follows:

The event is being webcast live. Japan is three hours behind New Zealand. Action will take place at from approximately 8:00am each morning of the event.

Olympic Qualification
The Olympic qualification process starts with the World Surf League (WSL) where ten males and 8 females on the 2019 World Tour will directly qualify for Tokyo 2020. No more than two athletes per nation can qualify via this process.