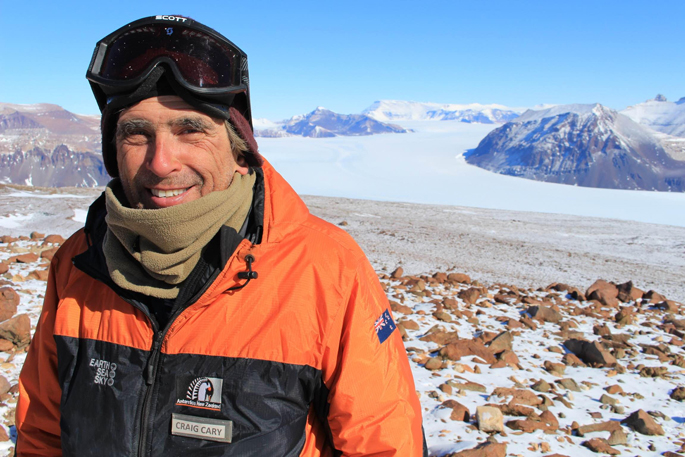 A team from the University of Waikato and University of Canterbury, led by Professor Craig Cary, has received a nearly $1m Marsden research grant to study unique micro-organisms that live in the geothermal fumerols of Mt Erebus in Antarctica.

This research will break new ground as they will be drilling to access the deep subsurface at the summit of Mt Erebus, an active volcano, which has never been attempted before.

This will make the fieldwork very challenging, as Professor Cary says, ‘no one knows how to drill into a geothermal surface of this volcano. We’re developing technology so we can continually monitor and observe, using temperature sensors, but it is an unknown.’

By drilling up to 10m into the sub-surface of the volcano, the team hope to gain access to micro-organisms that survive on the unique geochemistry on Mt Erebus is able to support.

“You only have to go 10cm deep to start discovering micro-organisms that aren’t found anywhere else in the world,” says Craig.

This project will build on previous research undertaken by Professor Cary and his team of Professor Ian McDonald and Dr Charles Lee, first funded by National Geographic then followed by a previous Marsden grant.

Their most recent papers indicated the need to go deeper into the sub-surface, resulting in this new study.

“As well as our previous research, the Universtity of Waikato has a rich history in working on the top of Mt Erebus. Emeritus Professors Roy Daniel and Hugh Morgan, who built the Thermophile Research Unit at the University, went up the mountain first to cultivate the micro-organisms found there,” says Craig.

As well as going deeper, this new study will involve the team growing the bacteria on site and at Scott Base, a task not usually undertaken as the conditions the micro-organisms exist in are extremely difficult to replicate.

One of the collaborators on the project, Slava Epstein from Northeastern University, has developed culture chambers that can be stuck down the bore holes drilled by the team, so they can incubate the bacteria in situ.

“Most bacteria in the world have never been cultured, so to culture bacteria from such a hard-to-reach place with such unusual chemistry is incredibly exciting,” says Craig.

“We are looking for bacteria that are accessing new sources of energy using methods only theoretically possible. Knowing this not only provides an exciting new foundation for the limits of life on this planet, but for life on other planets.”

This research will take place over four season spent on Mt Erebus, with the first season starting at the end of this year an exploration or ‘shake-down’, where the researchers will test every tool to see how it will work to explore the sub-surface plumbing they will be drilling through/

The following seasons will be intense, with a larger team travelling to the site, including a telecommunications person who will create a network on the mountain so the data can be monitored from anywhere in the world.

The team hopes to put in place a significant outreach programme, so those in New Zealand can see what is happening in real-time.

“This project is formidable, and a testament to New Zealand’s willingness to support high-risk science in very difficult to get to places, with a hopefully big payoff. We’re aiming to find some unusual bacteria doing unusual things,” says Craig.

The team’s possible finding could have ramifications for basic science, but also a myriad of possible applications commercially in the search for life on the planets, due to the geochemistry involved.

“We’re aiming to extend the boundaries of understanding of how life can exist on this planet, and thrive in these extreme environments,” says Craig.