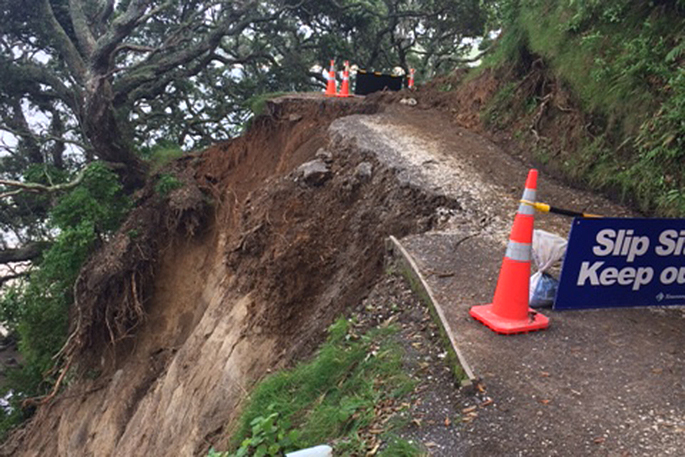 Repairs to Tauranga's iconic Mauao walking track are predicted to cost $5.2 million but locals say $60,000 and some shovels is all they need to fix it.

Tauranga City Council received submissions from the public, at their full council meeting on Tuesday, who had community-led ideas to repair the track which was damaged in April 2017 after Cyclone Debbie hit the Bay of Plenty.

Council received quotations from Tonkin and Taylor for remedial options which were estimated to cost $2.2 million which was approved in principle but two years later this option was predicted to cost an additional $3 million than first thought.

Michael O'Neill, presenting on behalf of mayoral candidate Andrew Hollis, says council needed to "keep it simple" and could have the track opened if they used community volunteers to complete the build.

Volunteers could simply dig into the slope of the track to allow access around the damaged area.

They would use local builders to complete the work and remove "less than a truck full of dirt" to allow the track to reopened.

A second option, submitted by local Trevor Clist, suggested building a bridge over the damaged pathway built into the slope itself.

Trevor says this approach would cost no more than $20,000 and could be done in a few weeks.

Both submitters showed dismay at the length of time repairs have taken and urged the council to consider a community-led solution to the issue.

Councillor Bill Grainger says they needed to ensure whatever options council took were safe for the one million-plus walkers per year.

"I hear cheaper. I hear keep it simple but it has to be safe," he says.

"First thing is if something happens on that track it will come back to us."

Michael says council would need to have its eye on the project and use consultants to approve designs but they have professional builders ready to start work.

"This is about the community coming together to do something as a group," he says.

Mayor Greg Brownless says the repairs to the base track had taken some time as all repairs needed to be approved by the mountain owners and The Historic Trust.

Council is still awaiting further information before making a final decision on which option will be used.

Because it would look awful? The Mount is a tourist hot spot, it’s on the doorstep of where all the cruise ships berth and you want them to build something out of cheap scaffolding? I see enough of that in the CBD I don’t want the side of the mount ruined by some cheap "she’ll be right, if we cut every corner and just drive a bobcat through" nonsense.

issue is not engineering...

The problem is bureaucracy, not the engineering.

Every time we hear about this repair job the $$ keep increasing...and not by small amounts!..surely there must (MUST) be someone out their who can do a totally safe, acceptable job for a ’reasonable’ cost?..why are we not asking the right questions?...the council ’preferred’ suppliers may ( just sayin’ MAY) be be well versed on being awarded jobs almost by ’default’ over other providors. It takes knowledge to pick these companies who have to conform to a suitable standard....perhaps this is another attribute our council do not have..........

who is getting a kickback in the costings for this track, and why is council paying for it when they don’t even own the land

They can build a grandstand for a sports event out of scaffolding that will hold hundreds of people: why can’t that method with some steel planks or bridges be used here at a fraction of the cost?

It’s great to see some "normal people" come up with solutions like this. Surely no-one can honestly believe that $5 million is a fair price. I am sure there would be volunteers come from around the country if a call was put out along with likely plenty of equipment being provided at no cost too. Wouldn’t it be nice if the locals just got the chance to get stuck in and get the job done.

Why dont the Council let Murrey Guy and the Geo Tech engineers fix it for the hundred thousand like they offered! Now they are talking of putting a track on the foreshore between memorial park and the strand and how long has it taken to fix this track!

Its a walking track.The slip ie.the week spot gone hasnt it?Just cut into the cliff to put a bend into the track,retain the the track base.What else is required to make it safe? Alternitve is a suspension bridge with a bit of swing in it to make it more exciting.

What an extra-ordinary amount of money to get in a bob cat, dig a new track well away from the edge and bingo, there’s your answer. The new track doesn’t have to be flat flat, some undulation is acceptable and far more accessible for some than those stairs.

Put the repairs up for tender up for tender and accept the one that covers all requirements. Don’t saddle the public with this ridiculous estimate!! Use your common sense TCC! Get the mountain owners to cough up, or at least supply the hundreds of manpower they have available, and who have nothing better to do!

For goodness sake, just slap some iron girders across, weld them up, job done. At least it would be recyclable. You’re dealing with an ever crumbling mountainside here, not bedrock. Don’t try and shore it up, bridge it !