No backdown on Tauranga begging-ban bylaw 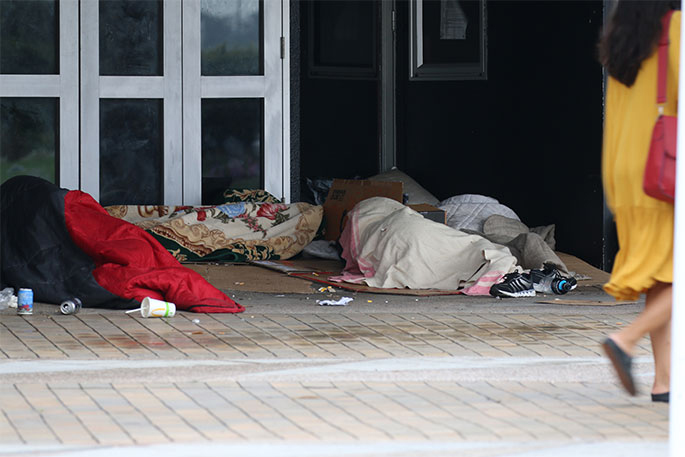 A potential $150,000 judicial review against Tauranga City Council's controversial begging ban by-law has done nothing to soften their stance on the issue.

Deputy Mayor Kelvin Clout says council needed to stick with the bylaw as it stood and do "New Zealand a service" by taking a stand against begging and rough sleeping.

The bylaw, passed in November 2018, made it an offence to rough sleep or beg within five metres of a public entrance in the CBD, Greerton and Mount Maunganui as a reaction to reports of reports of aggressive beggars using standover tactics to bully money.

The Housing Advocacy Trust filed proceedings in the High Court challenging the validity of the law as it breached New Zealand's Bill of Rights Act.

The bylaw polarised the community with some in full support and the Human Rights Commissioner Paul Hunt labelling it as unnecessary.

Council staff recommended the bylaw be put out to public consultation in the wake of the judicial review with the Trust agreeing to stay proceedings to allow this process to take place.

The Trust wanted the wording of the bylaw changed from "No person shall beg in a public place within 5 metres of a public entrance within a defined area of the CBD, Greerton and Mount Maunganui" to include a clarifying statement adding "in a manner that is likely to cause a nuisance, intimidation, harassment, alarm or any distress to any reasonable person".

Kelvin says this statement would "water down" the bylaw and the current law is clear.

"The current five-metre law is quite clear to the point some beggars have been seen with a tape measure measuring the distance," he says.

"We need to set a precedent with other cities around New Zealand."

Councillor Terry Molloy, who staked his job on the bylaw's success, says it was not until council stepped in with its bylaw that the standover tactics by beggars stopped.

"We had security guards out there [Greerton] and they felt intimidated and we needed to give them some backup," he says.

"I cannot support a watered-down bylaw."

After the debate, chief executive Marty Grenfell was asked "what happens next?" to which he replied, "That would have been a good question to ask before making a decision," he says.

"I imagine they [Trust] will reignite their judicial review."

A legal representative for the trust says they were "surprised" at the council decision and were meeting to discuss their next move.

"No person shall beg in a public place within 5 metres of a public entrance" - hah so they’re fine to sit outside all the vacant stores then. Good job the CBD isn’t chock full of those, oh wait...

We have dinner in Devonport Road every Friday night - every time we see ’homeless’ vagrants asleep around 8pm in the doorway of a shop near the top of Devonport Road, right hand side, just before Elizabeth Street intersection. WHY are they allowed to do this regardless? WHY aren’t the police moving them on and stopping this behaviour??

Who is enforcing this?

I do not see any improvement since this law was passed. People still in the doorway, by the Cinema, in Elizabeth Street. I was asked for money two weeks ago. In Grey Street I saw someone sleeping on the seat. on their bedding, at 11am, near the Lotto shop. I do not see anyone moving them on.

Good on you TCC for not backing down. We are trying to make our city more attractive and magnetic. The filth, the mess and the stench left behind by the majority of these people is disgusting. They have enough nouse to use a tape measure and by doing so therefore acknowledge they understand consequences so they know how to use a rubbish bin, a toilet and the mess they leave and the intimidation portrayed is unacceptable. Well done TCC.