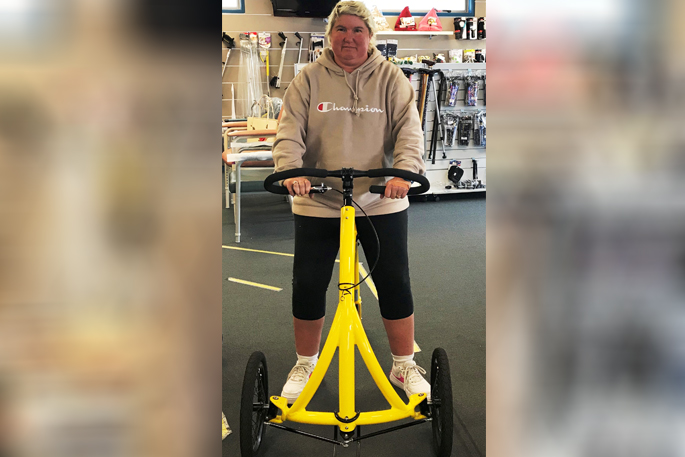 Two years ago, Tauranga woman Paula Cameron was at a low ebb in her life.

She couldn’t walk or exercise, semi-paralysed from the waist down, suffering from depression and had lost control of her bladder and bowel movements.

Then she went into the Life Unlimited Charitable Trust store in Tauranga on the off chance she might find something there to help.

What she saw was a bright yellow walking bike called the Alinker. The Alinker, a non-motorised walking bike without pedals, was invented by Barbara Alink who visited New Zealand in 2017 to launch the bike through the four Life Unlimited stores.

Paula says she saw the bike and asked the store manager Mandy ‘what do you use this bike for?’ She told Paula to hop on and try it.

“She explained that it was a non-weight bearing bike on the lower part of your legs.”

Paula purchased the bike, used it for two and a half years and it has changed her life.

The swelling went out of her legs, she was able to feel her kneecaps and see her ankle bones.

“It was incredible. I cannot believe how much I have benefitted from it,” says Paula.

She started off slowly because the nerve pain was so severe, and she had to be helped onto it.

Initially, she only used it around the house going from bedroom to bathroom, bathroom to kitchen and kitchen to the lounge.

After three months, Paula ventured outside going around the house and onto the driveway.

“The feelings slowly came back to my knees, I could feel my calf muscles working and my thigh muscles as well. Because my muscles were starting to work, it also was giving me the chance to regain control of my bladder and my bowel because I lost that for a very long time, and it was horrible.”

Eventually Paula, her husband and her Alinker were getting out and about – to the supermarket, doctors, physio, cafes, Pilot Bay and Mount Maunganui.

“It gave me so much relief and it gave me my independence.”

The Alinker weighs about 9kgs and is designed for people who want to stay active despite deteriorating health, a neurodegenerative disease, or even lower limb amputations.

Paula, nee Flett, was born in Te Awamutu in 1971 and moved to Katikati when she was eight. In Tauranga, she met and married her partner and the couple now have a 19-year-old daughter.

Eight years ago, her life changed for the worse when she had an allergic reaction to diazepam, which her doctor had prescribed for her migraines.

She was hospitalised, unable to walk and with permanent nerve damage in her legs and feet.

“Up to 2015, I struggled to work or anything. Work has been very limiting for me.”

Paula is confident enough now to say goodbye to the Alinker and offered it back Life Unlimited so others in need can use it.

She can walk unaided and now rides and electric bike which is helping her to stay mobile.

“I walk around Mount Manganui. I never could have done that. I keep saying, that bike has literally changed my life. It was the best $2900 I ever spent. If one other person can get their life back by using it, then it will be a great thing.

“I want someone else to be able to gain the opportunity and experience I have experienced from using the Alinker,” says Paula.

“We’re going to lend the bike out to other organisations so people can try it out.

“We know it is such a unique and life-changing bike and am thrilled to see how it has helped Paula,” says Todd.

“Our name ‘Life’ means Living Independence for Everyone and that’s exactly what has happened to Paula.”

Life Unlimited is a charitable trust which has Mobility Centre stores in Hamilton, Tauranga, Rotorua, Lower Hutt and from October, in Hastings.