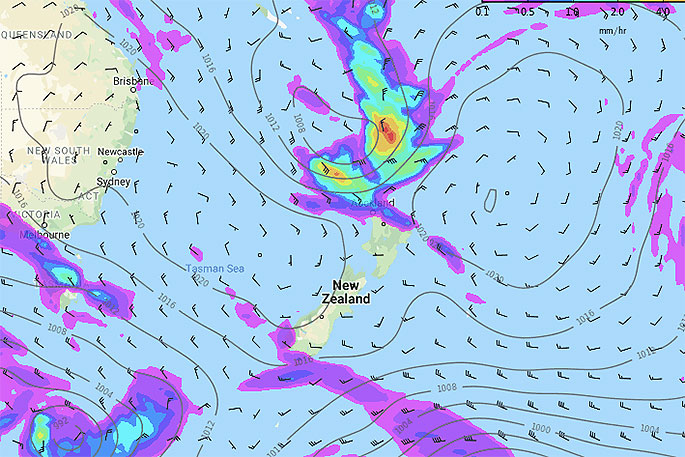 Current forecast for one week today, next Monday, showing a sub-tropical low in the north and high pressure elsewhere. Map thanks to MetOcean.

A week of spring-like westerly quarter winds are on the way which will push temperatures above average by day in a number of regions.

Not every day is warm but the general rule is the further north or east you are the milder it will be, says WeatherWatch.co.nz

"A couple of SW changes (like today and again on Thursday) may see some cooler weather in the south in particular.

"In saying that, over half of NZ is warmer than average both today and Tuesday and the rest are around average. Even our southerly changes are no longer dropping temperatures below normal."

But the windy westerlies - something WeatherWatchsays shows an early spring pattern - look to linger into next week too but will pause as high pressure rolls in this weekend and lingers to the start of next week.

"September kicks off on Sunday and at this stage high pressure looks set to be parked over the New Zealand area encouraging milder than usual weather for some regions (possibly colder nights though due to light winds and clearer skies).

"By Monday next week a sub-tropical low may well be descending on northern NZ with rain and sub-tropical winds while high pressure keeps things settled and calm elsewhere.

"It's unclear if this low will bring any significant weather to NZ or just brush us, we'll be able to confirm in the next couple of days."

"There are currently no signs of any major polar blasts on the horizon - in fact Queenstown looks to have double digit daytime highs kicking off from this coming weekend and the first few days of September."