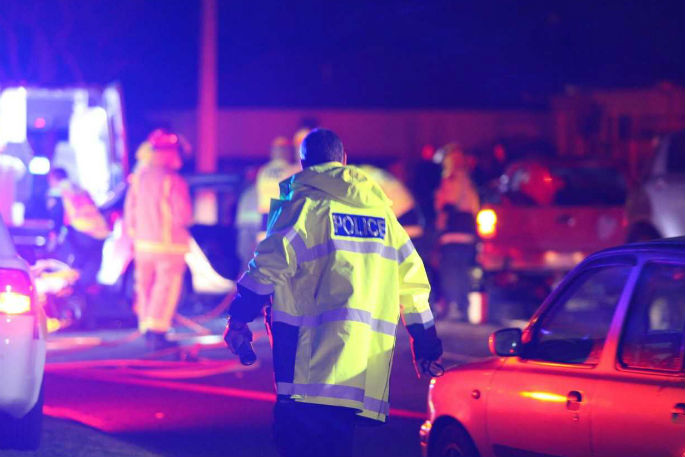 Three cars were involved in a serious crash which forced emergency services to closedown Ngatai Road for a couple of hours on Tuesday night. Photo: Cameron Avery/SunLive.

Tauranga City Council says it is about to start a review of speed limits across the city, including Ngatai Road.

One person was seriously injured and another sustained moderate injuries in the crash which saw emergency services shut down the road for at least two hours.

She says something needs to be done.

“I think what is happening is that the cars are going really fast down the hill and coming off the main road to fly down our road as a short cut, without stopping at the give way at the beginning of our road. Perhaps if they closed the through road that may help?

“I have phoned and emailed the council numerous times with concerns about the extreme speed that cars hoon down our road.

“I believe the incessant speeding down our road is due to Harbour Drive being one street over from us.”

Beth says Harbour Drive is favoured by “boy racers and they also go crazy speeds down there as well”. 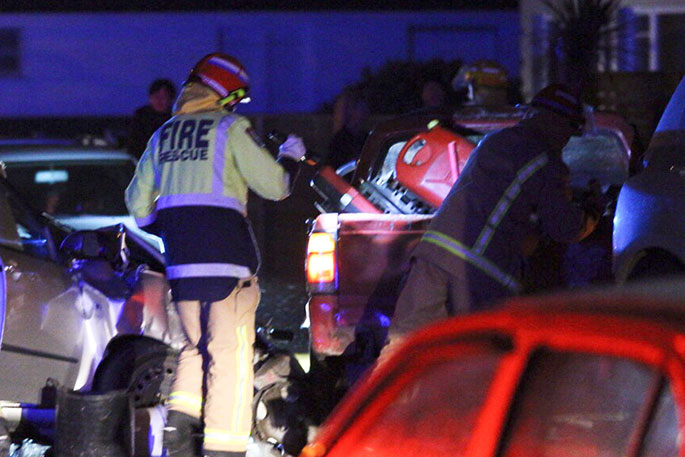 SunLive took Beth’s concerns to the council to see if anything was in the pipeline for Ngatai Road.

Martin says safe and appropriate speeds will help reduce the level of risk on Tauranga roads.

“Lowering speeds is one of the quickest and most effective tools we have to reduce the number and severity of road crashes happening across our city.

“Setting the right speed limits will help people feel safer when walking, biking, or travelling around in mobility scooters.”

He says communities have an important role to play in contributing to discussions about making our roads safer.

“Speed is an emotive subject and people will have different opinions as to what is the most suitable speed limit for the street where they live, on the roads they regularly travel to work, and outside the school their children attend.

“We want the Tauranga community to help us understand how we can make our streets healthier and safer for everyone.”

Meddling idiots thinking they know best. The currents limits are fine. The problem, as said by others, is that idiots completely ignore them.

Speed humps wont stop them,not with the respect they show for the road,.Your comments on red light running and using phone whilst was aired on here not too many months ago.It was commented on by the police the number of people doing it.They said they were going to clamp down on it.What have they done?I dont go into the CBD unless I have to,but Chapel and Elizabeth lights I pass through and every time I spot someone using the phone.All thats needed is cop standing on the corner writing tickets and taking a photo.

As said above the current speed limits are not being enforced so what possible good would become of lowering them? A reactionary statement just like we are experiencing through our current society penalise the whole community who are law abiding citizens for the actions of a few. Speed cameras, red light cameras all have their place but have to be monitored and then enforcement carried out. With the new bunch of police recruits coming in, how many would be traffic police has anyone got a handle on that?

It’s not the speed limite. It’s the lack of compliance and enforcement.

'Speeding with care' an appalling statement!

I drive my young children to school aprox 30 mins each way each day, so that’s just over 2 hours diving for me each day. Lowering speed limits is a must from what I see on a daily basis. Txt & cell driving, (five times today), people going 70-80 in 50 km zones, no indication before turning, overtaking on yellow lines, people towing trailers well exceeding the 90 km max legal limit. Drivers taking selfies, doing make up/hair and even shaving while driving, sometimes while tailgating, speeding and running red lights. Yes to safer lower speeds (ps: just a sign, you should never be speeding regardless of your beliefs in you ability!) I want to bring my children and myself home safe everyday. How about we enjoy this beautiful place we call home, value peoples lives and drive safely, cautiously and concentrate for everyone sake.

Pyes Pa road has more busy intersections so the speed should drop. Since Cheynne road has connected through and the shopping centre has thrived the traffic entering has increased. Every day car horns blare as people try to get into traffic doing 60 kph at the shops. The extra subdivisions also onto Pyes Pa road warrant a speed reduction as does the high school and the retirement village access to the bus stop in the other side of the road.

as the title says the Police just about wear the roads out from Brookfield along Otumoetai road into Ngatai road Through Bellvue and back to Brookfield ALL DAY.With the odd stop for a sleep in the summer in the shadows of the trees along Ngatai road by the railway lines HeHe

What was the point of the response from the council?. They stated the problem but in more words than Beth but mention of a solution. This is a suburban street, full of kids, with a preschool and the speeds are incredibly over the top. Both as an average daily speed and when those intent on using it as a drag strip.. hit it. We were all lucky that night that we do not now see white cross on this street. Does it need to come to that!!

I have contacted council several times about Pye’s Pa road speed and was told a year or more ago that the speed was about to be reviewed. I and many neighbors have difficulty trying to cross the road to the shopping centre and often get halfway across with cars flying passed it both direction. At 60 kph it’s not possible to see cars coming around into view and cross before they arrive. The current crossing island that has been demolished three times by vehicles and is only used by some of the shopping centre customers as another is needed to align with the shopping centre foot access ramp which is used most. It’s scary and dangerous for many especially the elderly as getting across the road in one go is not often achieved. Dangerous speeding doesn’t help

Speed humps may help, but half the streets in Tauranga would need to have them. Tainui Street is particularly bad, the speedsters get a good run down the hill on Waratah Street, gather momentum and scream down Tainui. This however is just part of the problem. Use of cell phones and texting still happens and no enforcement measures appear to happen. How about the running of red lights that many of us see daily, cameras are up but are these being watched and actioned ?

Lowering speed limits will only frustrate most drivers into taking more careless risks.Some of us speed with care and when safe to and others speed without knowing how to handle road conditions or know how to control their car. or concentrate on driving.Roads dont cause accidents,uneducated drivers do.Speed limit is just a number on a post to some drivers and they probably dont see it when they drive past or have it in their mind that this a builtup area and there is a limt on itMy main route is Ngatai/Chapel St.The worse drivers for speeding are young girls and middle age girls in flash cars.

Lowering the speed limit isn’t going to achieve anything. These guys are already exceeding the limit. The speed limit isn’t within their comprehension. Until there is some severe penalties introduced, nothing will change, because no one is afraid of the consequences.