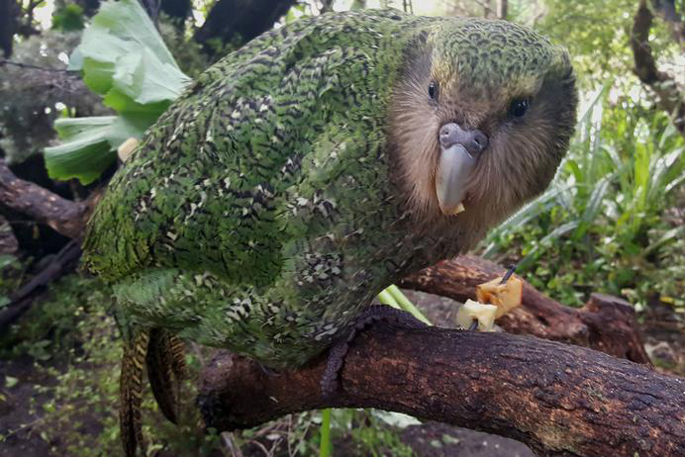 When kākāpō chicks reach 150 days old they graduate to being juveniles. They won't be counted as adults until they are four-and-a-half-years old. Photo: RNZ / Alison Balance.

Kākāpō have reached a big milestone, with an official population totalling 200, and for the first time the recovery team needs more habitat for the critically endangered birds.

When the chicks turn 150 days old they become juveniles and are officially counted as part of the population - a landmark which chick Esperance 3B19 reached yesterday, bringing the population to 200.

Deidre Vercoe is the operations manager of DOC's Kākāpō Recovery Team and says it was an incredible result for the breeding programme.

"It's such an amazing number, I couldn't have dreamed it a few years ago," she says.

Deidre says the Kākāpō population had skyrocketed from about 50 in 1990.

"That was off the back of decades of searches and then the discovery of a small pop on Rakiura, Stewart Island ... at the start of this year that population had grown to 142, and we've had a fantastic breeding season this year with 86 chicks hatched."

However, the breeding programme still has a lot of work ahead of it to bring the bird species back from the brink.

"We still have major issues around genetic diversity, obviously with such a small population there isn't much genetic diversity so it's really important for us to maintain as much as we have, and we had some wins with that this year with the success of the artificial insemination programme."

Deidre says they were also now facing a problem they never had to deal with before.

"A new issue for us is we're running out of space," she says.

"The two main breeding programme islands for kākāpō are Whenua Hou or Codfish Island; Anchor Island in Dusky Sound ... both islands are full now and we need to find new habitats for our growing population.

"So that's a really good problem to have."

A great success story with this treasured bird. Is it not time to re introduce the Kakapo to the North Island. Would not the Maungatautauri inland island welcome a breeding population of Kakapo. I am sure they will be secure and well looked after. Mark Watchman.