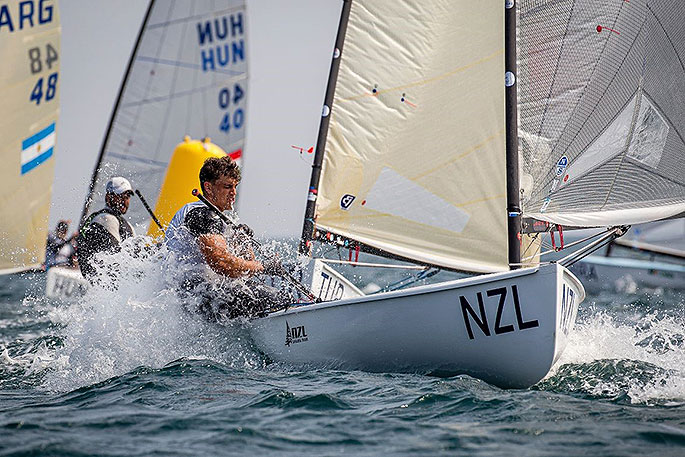 The race wins flowed for the New Zealand sailors on day three of the Olympic test event in Enoshima but, more importantly, four crews are all in medal contention heading into the final stages of the regatta.

Maloney then backed it up by winning his second race as well and he was the big mover of the Kiwi sailors, jumping five places into fourth overall.

Peter Burling and Blair Tuke sailed consistently well, never finishing outside the top four in their four races, and now hold a five-point lead over Poland's Pawel Kolodzinski and Lukasz Przybytek in the 49er fleet.

Sam Meech is second in the Laser and Maloney and Meech third in the 49erFX.

Andy Maloney has enjoyed a terrific run of results in 2019, winning two regattas and finishing second in another, but found himself in ninth at the start of day three at the Olympic test event.

"I knew what I was doing wrong in the first couple of days," he says. "Little mistakes were letting me down and I just righted those wrongs and was sailing much better today. It was definitely a confidence booster to get back on the right track."

It could have been even better, but he was involved in start line incident in the third race and forced to execute two penalty turns which put him at the back of the fleet. He fought well to finish 12th but it soured an otherwise exceptional day.

"I was setting up for quite a nice start at the boat end and with about 15 seconds to go the Dutch guy did a pretty late manoeuvre on me and sort of snaked my gap," he explains.

"He went into a big luff and my sail unfortunately hit his back and I had to do a 720 off the line. It was a pretty strong move by him. He’s a pretty aggressive guy and takes it to the limits."

Sam Meech found himself doing his second 720-degree penalty turn of the regatta when he, too, tangled with another competitor in his second race of the day.

"I didn’t think I infringed but the guy wasn’t happy and it was safer to do my turns so I lost a few places but at least I was clean at the end of the day," he says.

"I have done a lot more [penalty turns] than normal for me. Unfortunately, I also had a 360 in that second race too so a lot of time not moving forward around the track.

"I’m pretty happy. Apart from the two 720s I have done, I feel like things are going really well. I am going fast and in all the races I have been right up there. If I can keep going like this I will be really happy."

Meech still has two more days of fleet racing to go before a top-10 medal race and everyone, including leader Jesper Stalheim of Sweden, has a sizeable drop on their scorecard so there's still plenty of potential for movement on the Laser leaderboard.

The 49er and 49erFX fleets are entering the final stages of their regatta, with three more fleet races tomorrow before their medal race, and things are shaping up well for Burling and Tuke.

The pair are renowned for banging out consistently low scores and clearly enjoyed the surprisingly good sailing conditions (10-15 knots).

"When you have four two-lap races, there’s a lot of decisions to make and we managed to do that pretty well today," Tuke says. "It was nice to walk away with four good ones."

Maloney and Meech were also on track to do that in the 49erFX with three scores in the top four, but suffered a breakage in the other when things were shaping up nicely.

"We were winning the race but just before the gate the kite collapsed a little bit so Molly had to go in and re-cleat it and re-hoist it," Maloney says.

"Around the gate we realised one of the knots, which is pretty crucial, had somehow broken. It was a bit like the Volvo Ocean Race. Molly was by herself out on the wire while I rushed to the bow and tried to fix it."

The pair still had the lowest combined score of the day and are now third, five points behind Olympic champions Martine Grael and Kahena Kunze of Brazil with Saskia Tidey and Charlotte Dobson a further 10 points ahead in the lead.

Snow-Hansen and Willcox couldn't replicate their great start to the day and are 17th overall and Micah Wilkinson and Erica Dawson are 19th in the Nacra 17.

New Zealand results and standings after day three of the Olympic test event in Enoshima today: