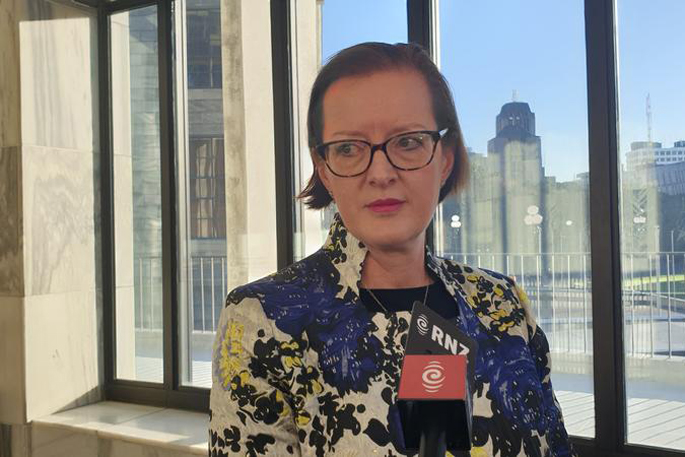 The Department of Corrections has asked the government to widen its powers, allowing more grounds under which it can block mail from prisoners.

Corrections Minister Kelvin Davis raised the matter with his Cabinet colleagues this morning after revelations last week that the accused Christchurch gunman had sent two letters from his cell which should have been stopped.

Speaking to media this morning, Corrections chief executive Christine Stevenson accepted its staff could have withheld those letters under the current law.

But she says the legislation could still be improved with "a little bit of a shift" in terminology to allow Corrections to be "a little bit permissive" about what it can block.

"The law, as it stands, gave us sufficient grounds to have withheld the letter that went out," says Christine.

"But it is possible that the law could be made a little bit clearer, so we've been talking to the Minister about that, and we'll see what the Minister wants to do."

Kelvin declined to answer questions about what he would be discussing with Cabinet ministers ahead of their meeting this morning.

He told reporters they'd have to wait for an announcement as to whether there would be any law changes regarding prison mail.

"We just don't know whether the law is fit for purpose. That's why we're having a good look at it."

In a statement, National leader Simon Bridges dismissed any suggestion of a law change as a waste of time, saying the current legislation was adequate.

"There are laws in place which should have stopped this from happening, they just weren't applied."

Simon says the failings were not due to the law, but rather "incompetence" by Corrections and Mr Davis.

"New Zealand has never had a prisoner like the man accused of murdering 51 people in the Christchurch terror attacks.

"It was Kelvin Davis' job to ensure that Corrections had the procedures in place to deal with him. Mr Davis has failed the victims.

"Instead of Cabinet sitting around talking about this today, they should save some time and focus on ensuring the laws that are in place are followed properly. It's time for Kelvin Davis to get on and do his job."

Corrections today also launched an 0800 number (0800 345 006) and email address (mailcomplaints@corrections.govt.nz) where people can alert authorities if they receive unwanted correspondence from prisoners.

"We have at least 15,000 items of mail leaving prisons every week. That is a vast volume," says Christine.

"There will be things that may slip out that we're not aware of, so if there's an 0800 number to be called ... then people can reach out to us and we can put a stop to it."

"heads should roll"? Exactly how would that improve the situation for the victims affected by this? Mistakes were made and have been acknowledged. I watched the PM’s comments after the cabinet meeting and there is no doubt that corrections are going to be very aware of mail in the future. It’s not the first time (under different governments...) that mail has been missed and the difference is that there is now renewed vigour to make sure it doesn’t happen again. The Law will be clarified and Corrections people will be applying themselves better. The ones who got it wrong will be the ones who are most "on it" now. Firing them would be foolish.

Simon Bridges is 100% right. Corrections is just making excuses for screwing up and letting our nation down. There’s no ’but’ you were in the wrong end of story. Don’t try to justify screwing up with excuses. You failed in your job and as you tell others, actions and inactions have consequences. Heads should roll. You accepted the responsibility of a dangerous, high risk criminal and you let us down as a nation. Had this happened at Servo you would be scathing.