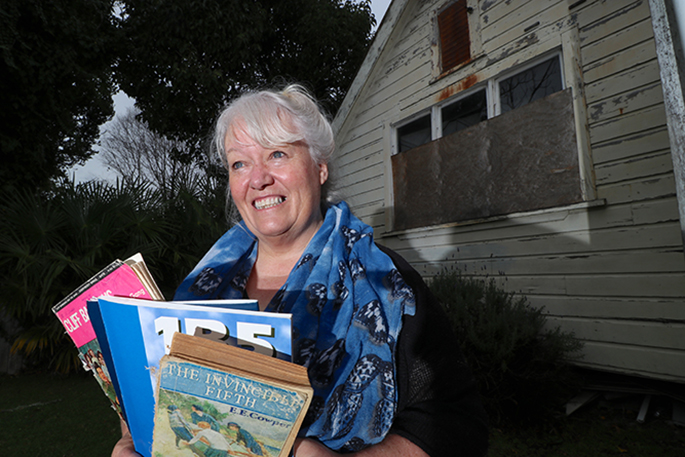 Rosalie Crawford was being flippant, but in jokes can lie truth.

Rosalie mused that if Katherine Mansfield had schooled at the tiny kauri schoolhouse rotting in ignominy behind the Bethlehem shopping centre, it would be enshrined in historic significance and city fathers and philanthropists would be throwing money at it.

Like Colin McCahon’s shack in Auckland’s Waitakere’s – trusts were set up, and tens, perhaps hundreds of thousands of dollars were spent preserving the house where the painter once lived and worked.

Sun Media’s Rosalie Crawford learned her ABCs in an accelerated learning class at the tiny gabled classroom with the sash windows in Bethlehem and today she has more degrees than a compass - ATCL (Music Teaching), NZCS (Paramedical), Specialist in Immunohaematology. But even this successful academic’s association with the tiny classroom counts for little.

It’s gone. Well, it’s going. The Tauranga City Council has given it away. Gifted they called it – zilch, nothing, free. According to a council minute, the boarded up classroom is in a state of disrepair, “with extensive water damage noted internally, decayed cladding, a leaking roof, and mould/fungi growth. It’s a dump”.

But, But… says Rosalie.

“Bethlehem School was once the Bethlehem Native School where Maori from  around Tauranga came for schooling. When I was a pupil there, that building was my classroom. We had 300 Maori and 10 Pakeha which was really an incredible and wonderful environment for me.”

And while it’s now a dump, it’s a special dump, an historically significant dump. And a dump worth saving. Because some bloke is going to cart the “gifted” classroom over the Kaimai Range and restore it for his historic village. Tauranga folk will have to go to Hamilton to see this piece of Tauranga-ana. That’s got Tauranga City councillor John Robson stumped.

“Yeah, okay, it’s going to be expensive to restore,” says John. He heard a conversation where a figure of $300,000 was being bandied around. “But it’s disappointing some of the proud advocates of a $55 million museum which has become a $67 million dollar museum, can’t find in their hearts to find one half of one per cent of what was proposed for a museum to save a real piece of our history.”

And there was another conversation, one John had with the new owner of the Bethlehem School classroom. “I said: ‘if there’s a situation where your project looks like it will fall over, you’re not prepared to proceed, give me a call. And at that point, depending on where I am, you know, maybe I will just pick the building up and truck it back here. We’ll figure what to do with it’.”

Even in the council reports, the building is referred to as ‘The Bethlehem Scout Hall.’

“It typifies our inability to frame things in an objectively reasonable way,” says John. “It may have served as a scout hall at one stage, but it doesn’t describe its first or last use.” He says it would be nice to see it saved.

Councillor Steve Morris doesn’t have an attachment to the Bethlehem School classroom one way or another. “However, we don’t have too many of that sort of historic building left in town. They’re usually demolished.”

But he is concerned about due process. “The only fair way of ethically disposing of a council asset, or you could categorise this particular building as a liability, in my view, is for a contestable process.

“Not necessarily to the highest bidder, but weight the tender towards somebody who’s going to keep it local, or a community group or what have you. But certainly there should have been a process – just in terms of transparency, openness and good governance you should make a public offer and if there are no takers, then obviously you proceed with whoever showed the initiative.”

It’s been said the building was advertised for “disposal” a few years. A chap from Whakamarama had a vision, but that didn’t work. House removal companies were approached. That didn’t work.

“But again I think it belongs to the public,” says Steve. And, it belongs here in Tauranga.

The classroom is not just dripping from a leaking roof, it’s dripping with nostalgia.

“School principal Mr Gestro took me into an accelerated learning class in that room,” says our Rosalie. “I learnt fractions and decimals there. And Mr Gestro instilled in me the idea I could learn and that I was important. And all our Maori class, plus me and Beryl, got taught about Captain Cook sailing right on by Tauranga.”

It was all about Captain Cook and Pakeha history apparently – nothing about the 1867 Tauranga Bush Campaign – Te Weranga ki Taumata - nor Gate Pa. But that was attitudes of another time.

Then the building was moved behind the Bethlehem Hall. Every time Rosalie drives past it, she glances to check it is still there. But now the deal is done, the inks drying and the Bethlehem School classroom, a little bit of us will be lost to others, in the Waikato. That’s a shame. Is it really too late?