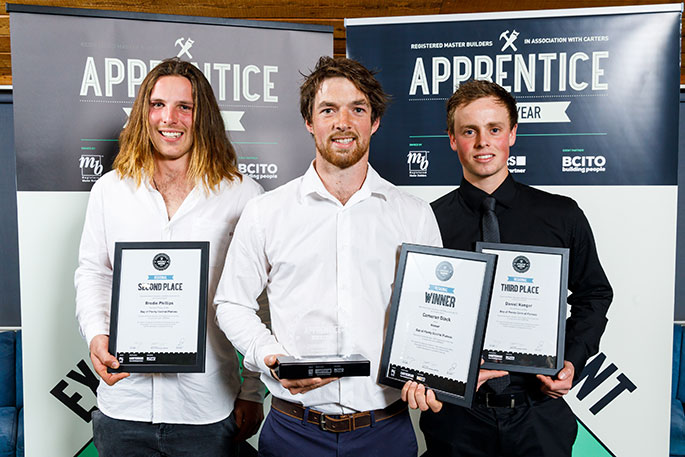 Building apprentice Cameron Diack has been named the Bay of Plenty/Central Plateau Registered Master Builders CARTERS 2019 Apprentice of the Year.

The 23-year-old from Mount Maunganui trained through Toi Ohomai Institute of Technology and is employed by Jones Builders.

The apprentices were judged on a two-hour practical challenge – where they built a bird box, and their initial entry submission. The top 10 in the region progressed to an interview with the judging panel, which was followed by an onsite visit where contestants discussed their project.

The results were announced at an awards evening on Friday at the Tauranga Yacht and Power Boat Club.

Cameron impressed the judges with his high standard of workmanship and attention to detail.

“Cameron is a confident individual who demonstrated a high level of industry knowledge throughout the competition. He has great communication skills and is extremely motivated to be successful in the building industry.

“Cameron has a high standard of workmanship and attention to detail, which will see him have a bright future ahead of him and be an asset to the industry.”

Second place in the regional competition was awarded to 21-year-old Brodie Phillips from Tanners Point who was trained by BCITO and is employed C B Homes.

Judges said Brodie demonstrated a high skillset and was able to quickly work through issues.

Third place was awarded to 23-year-old Daniel Ranger from Tauranga, who was trained by BCITO and is employed by Calley Homes.

Judges said Daniel is a confident individual, who displayed a thorough understanding of specific building knowledge. Registered Master Builders Chief Executive David Kelly says, for nearly 15 years the Apprentice of the Year competition has been showcasing and rewarding the country’s best apprentices.

“Highlighting talent at the Apprentice of the Year competition is a fantastic way to show the growth opportunities within the building industry. These apprentices are our industry’s future leaders.”

The competition not only recognises excellence among building apprentices, it also acknowledges and celebrates the employers that contribute to the industry by investing in apprentices.

“We need more employers to invest their time, skills, and energy to train their apprentices and meet the growing demand, as we believe that on-the-job training gives apprentices the best opportunity to kickstart their careers. With the construction skills shortage currently facing the building and construction industry, the value of an apprenticeship has never been higher,” David says.

BCITO Chief Executive, Warwick Quinn, says the organisation is proud to be involved with an event that showcases the talent of the building and construction industry’s future leaders, at a time when they are needed the most.

“Apprentice of the Year is a fantastic way to celebrate the talent that exists within the industry. All of this year’s finalists are strong role models for those considering a career in the trades, and we look forward to seeing them put their skills to the test in the national competition.”

Supporting the competition for 15 years, principal sponsor CARTERS Chief Executive Mike Guy says it’s been fantastic to see the development of thousands of young talented apprentices throughout the years, and to see them go on to have successful careers within the building industry.

“Our longstanding partnership with Apprentice of the Year reflects our commitment to supporting this growth and ensuring we are providing apprentices with the tools, mentoring and training they need to succeed.

Cameron will now go on to compete against the winners from the other eight regions at the national CARTERS Apprentice of the Year 2019 competition in Auckland this November.