Police seize millions worth of meth in BOP 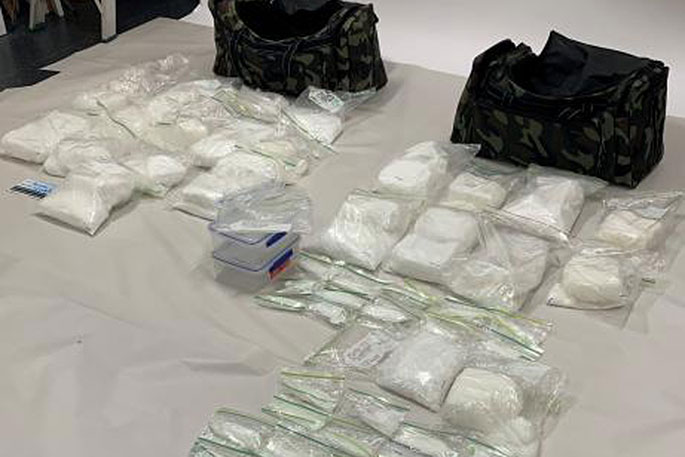 More than 60kgs of meth has been seized. Photo: NZ Police.

Police have seized more than 60 kilograms of methamphetamine and arrested a man after carrying out a search warrant in Rotorua.

Police executed a search warrant at a property in the suburb of Fairy Springs about 10pm, and located at least 20kgs of the drug.

A 42-year-old Rotorua man was arrested and charged with possession of methamphetamine for supply.

As a result of further enquiries, Police also located a storage shed in Ngongotaha allegedly linked to the man – which is estimated to have contained a further 40 to 50 kilograms of methamphetamine.

The at least 60kgs seized has an estimated street value of more than $36 million, says Inspector Phil Taikato.

The man is due to appear in the Rotorua District Court today.

“This is a significant amount of methamphetamine with a potential to cause serious harm to our local community. There is no denying the detrimental impact methamphetamine has on people’s lives,” he says.

“It has the ability to destroy families and lives, and the desire to obtain the drug is a driver of crime and harm within our community.”

Phil wants to acknowledge the hard work and dedication of staff who were involved in the seizure, and their commitment to intercepting the supply of this harmful drug.

He urges anyone who has information on drug dealing in our communities contact Police or provide information anonymously via Crimestoppers on 0800 555 111.