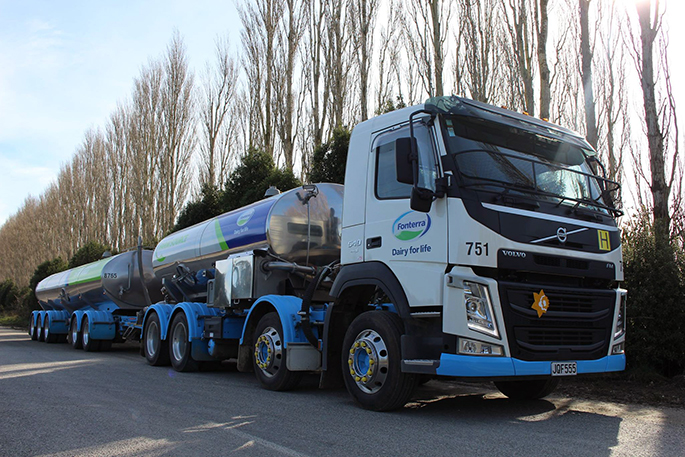 After preparing its financial statements, Fonterra says it needs to reduce the carrying value of several of its assets and take account of other one-off accounting adjustments, which total about $820-860 million.

Fonterra has announced it expects to make a reported loss of $590-675 million this financial year, taking into account likely write-downs.

The announcement comes in advance of the annual results due next month. Last year the dairy giant made its only ever loss of $186m.

Fonterra chief executive Miles Hurrell says as a result, it would not pay a dividend for the 2019 financial year. This is a first for the co-op since 2001-2.

Fonterra today reconfirmed its underlying earnings guidance for the 2019 financial year that ended on 31 July 2019 (FY19), announced a final decision on its full-year dividend for FY19, and provided further information on some significant adverse one-off accounting adjustments.

Miles says as a result of the full review of the business which has taken place across the year, as well as the work done so far to prepare its financial statements for FY19, it has become clear that Fonterra needs to reduce the carrying value of several of its assets and take account of other one-off accounting adjustments, which total about $820-860 million.

“Since September 2018, we’ve been re-evaluating all investments, major assets and partnerships to ensure they still meet the Co-operative’s needs.

“We are leaving no stone unturned in the work to turn our performance around. We have taken a hard look at our end-to-end business, including selling and reviewing the future of a number of assets that are no longer core to our strategy.

“The review process has also identified a small number of assets that we believe are overvalued, based on the outlook for their expected future returns.

“While the Co-op’s FY19 underlying earnings range is within the current guidance of 10-15 cents per share, when you take into consideration these likely write-downs, we expect to make a reported loss of $590-675 million this year, which is a 37 to 42 cent loss per share.

“We made a commitment to provide information to update farmers and unit holders as it comes available.

“The numbers still need to be finalised and audited but we now have enough certainty overall to come out in advance of our annual results announcement in September.”

Miles says the majority of the one-off accounting adjustments related to non-cash impairment charges on four specific assets and the divestments that the Co-op has made this year as part of the portfolio review.

“DPA Brazil, the New Zealand consumer business, China Farms and Australian Ingredients’ performance have been improving, but slower than expected and not at the level we had based our previous carrying values on.”

“These are tough but necessary decisions we need to make to reflect today’s realities.

“We’re in no doubt that farmers and unit holders will be rightly frustrated by these write-downs. I want to reassure them that they do not, in any way, impact our ability to continue to operate.

“Our cashflow remains strong, our debt has reduced and the underlying performance of the business for FY19 is in-line with our latest earnings guidance of 10-15 cents per share. We remain on track with our other targets relating to reducing capital expenditure and operating expenses.”

Chairman John Monaghan says that in-light of the significant write-downs that reflect important accounting adjustments Fonterra needed to make, the Board had brought forward its decision on the full year dividend for FY19.

“We have made the call not to pay a dividend for FY19. Our owners’ livelihoods were front of mind when making this decision and we are well aware of the challenging environment farmers are operating in at the moment.

“Ultimately, we are charged with acting in the best long-term interests of the Co-op. The underlying performance of the business is in-line with the latest earnings guidance, but we cannot ignore the reported loss of $590 - $675 million once you look at the overall picture.

“Not paying a dividend for the FY19 financial year is part of our stated intention to reduce the Co-op’s debt, which is in everybody’s long-term interests.

“Our Co-op remains strong at its core. Over the last 12 months we have improved our cashflow, reduced our debt and removed significant cost from within the business, but there is still more to do. The business units that are at the heart of our new strategy are delivering for us and we look forward to discussing our new strategy and our performance with our owners in September.

“It’s important that we now implement our new strategy and deliver value back to them.”

$135 million loss on what should have been a no-brainer...? Given the situation that has existed there for a few years now, why would anyone make significant investment into such a country and currency? Consolidating and carefully expanding existing established markets should be the goal. The amounts being tossed about would be huge by the standards of most normal businesses; I wonder if their management has simply become cavalier and lost sight of the actual value of these amounts...

Farmers have again been duped by " stuffed white shirts " whose greed and self importance knows no bounds, wake up, Kiwi’s ... Fake CEI’s are real jerks.