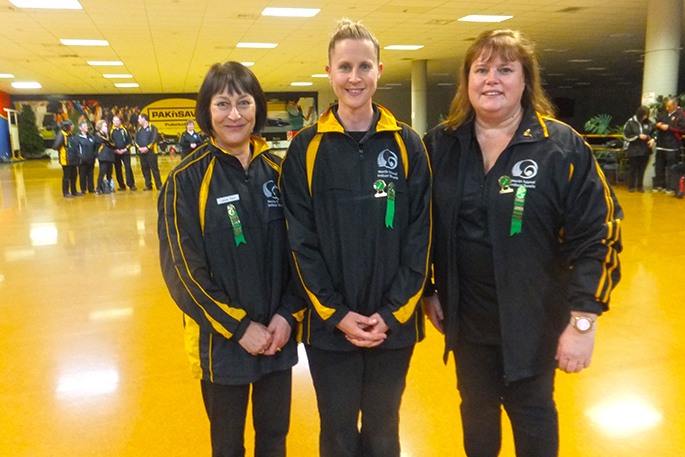 Lorraine and her team mates Sarah Warrington from Manawatu, and Shelley Jacombs from Hutt Valley won the Women’s Triples.  Their fellow North Island teams battled through to also win Inter-Island medals in the men’s and women’s singles and men’s triples, beating the South Island 25-23.

The South won the women’s fours, men’s and women’s pairs and men’s fours, making it a very close tournament with the North Island Indoor Bowls Team coming from behind to win against the South Island at the Pukekohe Cosmopolitan Club on Saturday.

Last year the South was in a similar situation leading 20-12 after two sessions but the North came back to draw level and to win on a count back of ends. This year the North won seven of the eight games in the final session to win the trophy outright.

The North’s win was spearheaded by the women’s triple of Shelley Jacombs, Sarah Warrington and Lorraine Phipps who recorded three wins against Caroline Braithwaite, Carolyn Cooper and Vanessa Tyson 26-17, 24-20 and 23-22. The last game was a real nail biter with the South in the position of winning the crucial two points the South needed when they led 12-5 after eight ends but the North fought back to tale the lead 14-13 after 13 ends. The South came back to take the lead 22-17 after 18 ends and the South supporters on the sideline were getting excited but the North dug deep and scored a thee, two and a one on the last three ends to win 23-22.

Another cliffhanger was the third women’s singles game when Keri Te Tamaki for the South and Jess Moffat for the North had won one game each in the earlier rounds. Te Tamaki seemed to have the win within her reach and -11 after 18 ends. Jess scored a two and a three to go into the final end 16-15 up. On this end Keri held two shots for the draw when Jess played a superb last bowl up the side of the mat to hold the win. Keri tried to draw the shot but ran past with the North stealing the win.

The South’s men’s four of David Webb, Derek Sinclair and Daniel Sinclair were the South’s only unbeaten side beating David Archer, Mark Ridley, Shaun Blackbourn and Tim Veale 20-13, 17-9 and 13-12 to give the South a chance.

By this stage the North had won the final games in women’s singles, pairs, triples and fours and the men’s singles and pairs. With just the men’s triples in the balance the mat was surrounded by players as the outcome of the test match came down to this last game to finish.

Both teams had won one game each and in this decider the South got away to a handy lead after six ends to be 11-2 up. But the North scored a single, four, two, and three to take the lead 12-11 after ten ends, the South scored two shots on the eleventh end to lead 12-11 but a two to the South saw them 13-12 up.

The North then scored three singles to lead 15-13. The tension rose as both teams exchanged the lead to be 18-18 after eighteen ends. The South scored one shot on the 19th end to lead 19-18 but a two to the North on the penultimate end saw the South under pressure.

Two great lead bowls by Richard Caddy put the South under pressure and in trying to retrieve the situation James Sullivan killed the jack for the South to be 22-19 ahead.

On the extra end because of the kill Alex Reed deliberately killed the jack to win the match 22-21 and in so doing the Kevin Eddy Memorial Trophy. 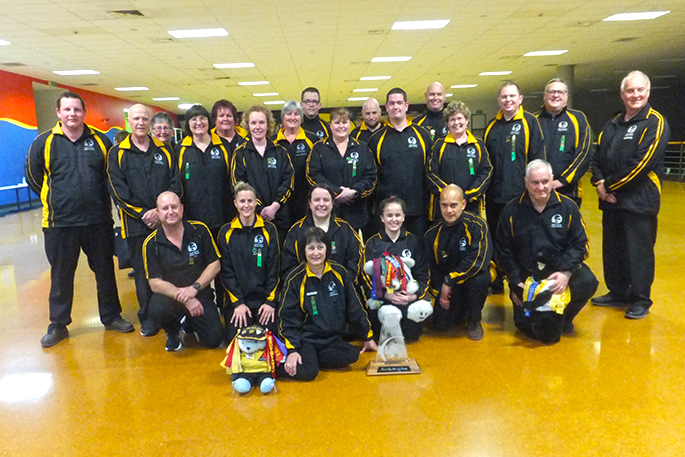