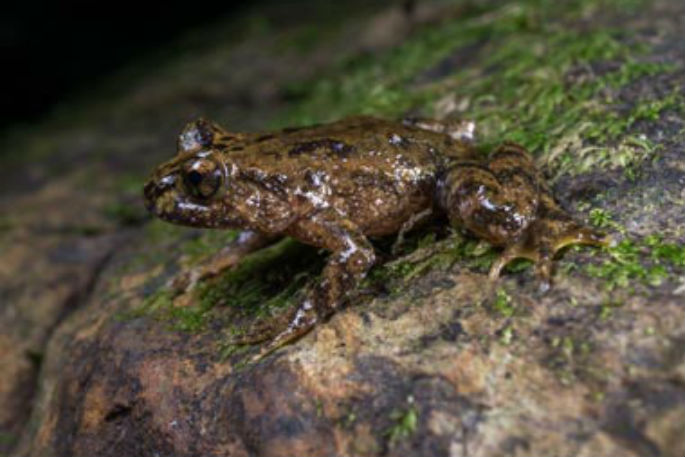 A network of 700 automated kill traps is standing guard over a unique population of native frogs near Te Puke, part of a joint effort to make ‘leaps’ in their population growth.

Among the world’s most ancient frogs, these wee amphibians in Otawa Sanctuary are a genetically distinct population of Hochstetter’s frog. They are thought to number only around 100-200 living alongside two streams within the forest.

Automatic self-resetting traps have been set out to protect the frogs by contractors and volunteers from the Te Whakakaha Trust, as part of the Department of Conservation Tiakina Nga Manu – Battle for our Birds programme.

“To ensure sustained control of rats year-round, the latest in ground control trap technology has been decided as the best predator control method for this site,” says Jeff.

It took contractors months to place the traps over 350 hectares of steep and very rugged forest. Volunteers and contractors will now check them every four months.

The Tiakina Nga Manu operation supports the efforts of the Te Whakahaha Trust, Bay of Plenty Regional Council, Western Bay of Plenty District Council, Te Puke Forest and Bird, and Waitaha and Tapuika Iwi – who are collectively striving to not only increase the frog population but the other wildlife as well, including birds, bats, lizards, insects, freshwater fish and threatened plants.

A major future focus for Otawa will be to develop and implement a frog monitoring methodology to better understand the population and the impacts of introduced mammals.

The Tiakina Nga Manu programme is funded from the Government’s Budget 2018 investment in predator control of $81.2 million over four years. This provides for sustained predator control over an increased area of public conservation land.

Hochstetter's frogs like to hide under stones in damp ground near streams that are shaded by native forest. The main threats to the survival of these individuals are predation by rats and other introduced predators. Frogs are susceptible to predation 24/7 throughout the year so need continual predator control, unlike birds which are generally only susceptible during their breeding season.

The Hochstetter’s frog is a primitive frog having some of the most ancient features of any frogs in the world, including tail wagging muscles. They are located in isolated pockets across the upper North Island. A history of glacial and volcanic isolation has produced ten genetically distinct populations.