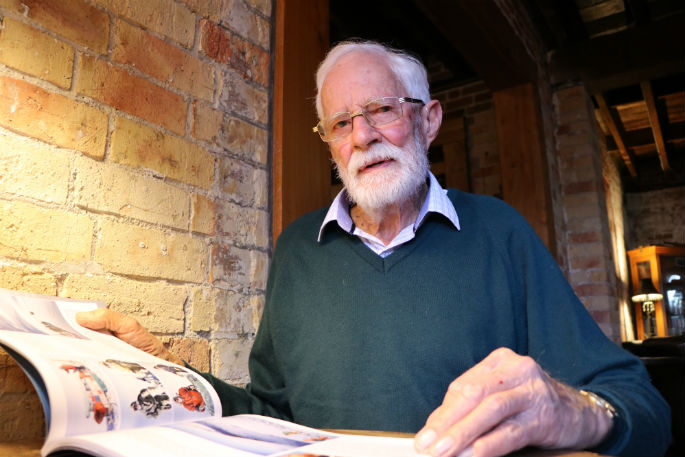 Peter Otway looks over the book he published about time spent at Scott Base in the Antarctic.

At a time when New Zealand heroes exclusively wore rugby boots, Tauranga’s Peter Otway was in awe of men of snow and ice, men of the Antarctic - adventurers and explorers like Sir Ernest Shackleton, Robert Falcon Scott and Roald Amundsen.

“Antarctica became my school boy dream the moment I saw that classic film ‘Scott of the Antarctic’ in 1949,” says Peter in the introductory passages to his book prosaically entitled ‘Exploring the Transantarctic Mountains by Dog Sledge 1960-62’.

The 1948 film chronicled the Terra Nova expedition – Scott’s ill-fated attempt to be first to reach the South Pole. By comparison, Conway’s Antarctic experience would be a cake-walk and one day he would be writing books about it.

Peter Conway’s boyhood fixation with the Antarctic was reinforced on his 13th birthday with an introduction to snow and skiing on Mt Ruapehu.

“And 11 years later, dream became reality when I flew south to New Zealand’s Scott Base as a recently qualified land surveyor.”

He would spend 16 months ‘on the ice’ assisting the Ross Dependency reconnaissance mapping programme.

Peter Otway probably didn’t know it at the time, but a book was inevitable, a self-published, scientific pictorial travelogue, one man’s adventure in a white wasteland, one of the most hostile climates on the planet.

Okay, there is a lot of topographical and geological food and energy here for information driven souls.

But pick it up, start thumbing and you won’t put it down until reaching Emeritus Professor Peter Barrett’s review of a “wonderful window” and a “clarity and freshness” on the back cover and scanned that final montage of vibrantly cold images.

For those removed from the science there’s an intimacy and mood in Peter Otway’s photos and script.

Sure, there’s the statutory but still spectacular ice and snow scapes.

“Monday, November 28, 1960, my first camp,” writes Peter from a rocky outcrop overlooking a vast white expanse to a craggy range. “We’re 2800ft above sea level where no-one had ever set foot.” Otway takes us there with his photo.

But then there’s the earthiness of the mundane and the routine – everyday life at this southern most post. The haircuts, the card schools, the baths – yes Rory taking a tub with his model battleship. Men do funny things when housebound by perpetual darkness and cold.

Baths were a treat – one every ten days after being “house mouse” – the person charged with tidying and cleaning the huts. And being out in the snow and ice meant the field crews didn’t bathe for 90 days at a time.

“There would be a ceremonial burning of underwear when we got back to base.”

As a surveyor in a small field party during consecutive seasons Otway would explore and map sections of the virgin Transantarctic Mountains.

“We would be entering territory previously untrodden by man.”

Except when he might just have traversed the tracks of his heroes, Shackleton, Scott and Amundsen.

Throughout his work Peter Otway would travel by dog team more than 1000 kilometres in three months. Dogs – huskies – feature prominently.

“My only experience with dogs before that was the family spaniel.”

The images demonstrate an obvious attachment and respect for the Huskies.

“There were no women in the Antarctic in those days – only hairy-arsed explorers and scientists – so the dogs got all the attention.

“And especially the pups.”

“They’d be rearing to go every morning. And fighting – it seemed to be recreation for them.”

To make the point there’s an image of Fido bearing his fangs at the aptly named “Peabrain” who’s picking a fight.

Then for the deadest cuteness factor, a Husky pup after being asleep in a snowstorm for two hours.

Or for that matter, a human after one hour exposed to minus 50 degrees Celsius. There’s mealtime out in the field – powdered soup, meat bar stew, biscuits and instant coffee, every night for three months. And there’s frozen blocks for the dogs – huskies apparently prefer seal meat to mutton. The quota of 60 frozen seals is chain sawed into manageable pieces for the dogs.

And there’s Peter Otway outside his tent, lying back reading on an airbed in the snow – and in the sun. The temperature is minus 13 degrees Celsius.

Peter’s book is a reprise of ‘It’s a Dog’s life in Antarctica’ – a revised, updated take on ‘Exploring the Transantarctic…’ etc, etc. Why the name change? Only change things to improve them. The first publication fully documented Peter’s diary of the time – the latest is much less wordy and more palatable to the general reader.

Put it on the coffee table. It’s guaranteed you will pick it up again during the ads on TV and see something new and marvel again at Peter Otway’s Antarctic adventure.

‘Exploring the Transantarctic Mountains by Dog Sledge 1960-62’ is available at Books A Plenty in Grey Street.