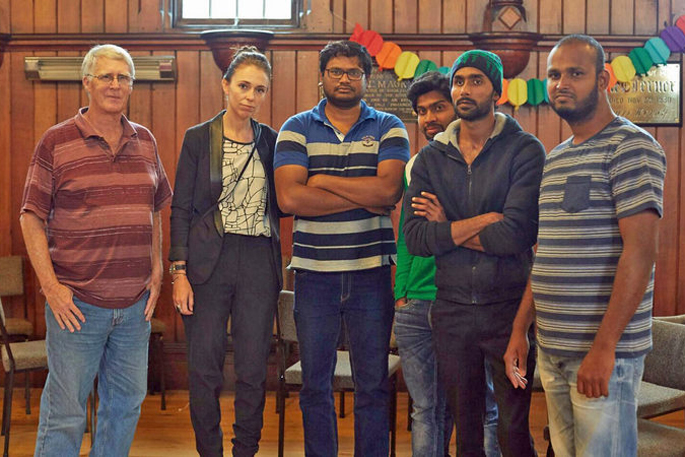 Jacinda Ardern visiting a group of students who sanctuary at the Unitarian Church in Auckland in 2017 before being deported. Photo: RNZ/Brad White.

An immigration lawyer says the government is reneging on pledges it would not let foreign students carry the can for fraud committed by agents without their knowledge.

Under a new interpretation of existing legislation unveiled to lawyers last week, international students will bear the blame if their education agents give false information in their applications.

Officials will also not have to prove the student had any intent to deceive.

Immigration New Zealand in its consultation with lawyers, say it had misinterpreted the legislation in the past.

Proving intent had not been part of what they had to consider when looking at whether someone was of "good character" for two decades.

However, it and the appeals tribunal had continued to rely on a 1994 Court of Appeal case which ruled that "an omission when completing a permit or visa application could scarcely say anything useful as to character unless it were deliberate and dishonest".

Lawyer Alastair McClymont took a case to the Ombudsman about a group of Indian students who had false bank documentation in their original visa applications lodged in India.

They took sanctuary at the Unitarian Church in Auckland in 2017 and were deported.

He says the new approach was draconian and harsh and left students with no recourse, as overseas education agents were exempt from the usual New Zealand immigration licensing requirements and penalties.

"This is the outcome of several years of immigration investigations regarding offshore education fraud and an ombudsman complaint, which basically concluded that the legislation gives the government to power to simply place all of the blame solely on the students regardless of whether they know what their agents are doing on their behalf," he says.

"A lot of the fraud which is going on is from unregulated offshore education agents paid huge amounts of commission by New Zealand schools, with these agents having huge motivation to provide false information and fraudulent documents to Immigration in New Zealand.

"But rather than dealing with the problem of the unregulated education agents, they instead want to blame the students solely for anything that the education agents do in order to earn these very large commissions."

The law could be applied in this way, but it went against the compassionate attitude that Labour called for when in opposition, he says.

"Jacinda Ardern said at the time that the government has an obligation in these sorts of situations to make sure that the students' reputations are not besmirched by the actions of others.

"Iain Lees-Galloway, the current immigration minister, made similar statements about the government needing to offer compassion and natural justice, yet, we now have them in power and they seem to be sitting on their hands and doing nothing."

He says it was unclear whether the shift had been approved by the Immigration Minister.

Four of the students whose cases he took to the Ombudsman were eventually granted new visas, but for others their visa rejections or deportations stood.

In a statement, Immingration NZ says it had always required students to make a declaration stating the information provided in their visa application was true and correct, regardless of whether they used an immigration adviser or education agent.

"As with all visa applications, the responsibility is on the applicant to ensure they provide genuine and accurate information as part of their visa application," says operations support manager Michael Carley.

"Following the Ombudsman investigation into the treatment of a group of Indian students INZ considered it was more appropriate to decline applications containing false information using specific sections of the Immigration Act rather than immigration instructions.

"INZ is not responsible for licensing issues."