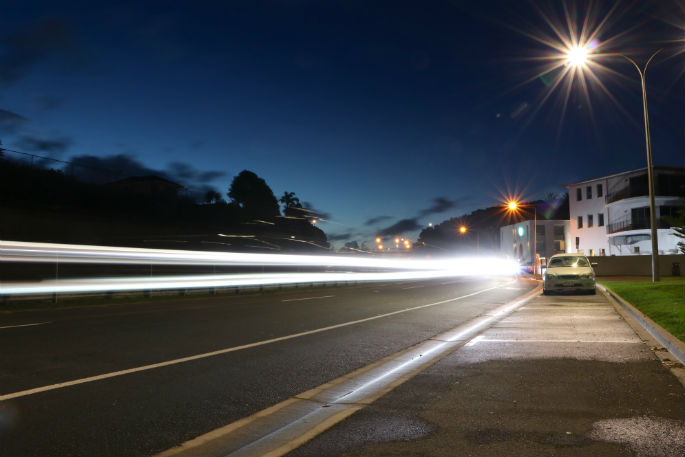 Taxi drivers on this section of Dive Crescent have come under fire from rocks and other missiles launched from the cliffs above. Photo: Daniel Hines/SunLive.

Softball sized rocks and golf balls have become missiles and hurled by hooligans from the bank along Cliff Road at vehicles travelling on Dive Crescent late at night.

And there have been calls for the perpetrators to be caught before someone is seriously injured or even killed.

SunLive has been told taxi cabs have been struck by golf balls and rocks and windscreens broken, although, fortunately, there have been no injuries.

“It was like a mortar being fired at me, gave me a helluva fright,” says cabbie James. He did not want to be identified. “I looked back and saw these two huge rocks in the middle of the road and I thought: ‘whoa! They had been coming my way’.”

James says they weren’t pebbles, they were rocks, softball sized stuff. He has come under fire three or four times and once his windscreen was broken. He’s had other close shaves where the rock crashed into the window frame of his taxi van.

“It made enough of a dent that had it hit the windscreen it would have smashed it,” says James. It could easily have caused him serious injury, or worse. Each time, he says he has complained to the police.

The cabbies won’t be drawn on whether they believe the attacks are acts of wanton vandalism, or are racially or professionally motivated. “To be honest, we have no idea what the reason is,” says Ash Marwaha, New Zealand Cabs Tauranga office manager. “But someone could get seriously hurt.”

“It’s reckless and it’s extremely dangerous,” says leader of the opposition and Tauranga MP Simon Bridges. “And I am calling on the police to be there on Saturday nights to stop this behaviour.” From what SunLive has learned, the missile attacks only happen at the weekend.

Police say they received several complaints late last year but have no record of any more recent complaints.

The cabbies raised the issue this year with Simon Bridges who is a regular cab commuter. “They wanted my help. I suggested they talk to the media but they didn’t want to cause a fuss, they didn’t want to be seen complaining about a perceived lack of action on their complaints to police.”

And to ensure a safer, better CBD, the MP wants the police to be on Cliff Road on Saturday night. “Not dealing with this every Saturday night is inexcusable given this criminal activity is taking place literally under their noses.” The central police station is a few hundred metres from where the rocks are being launched.

A police spokesman agreed the behaviour has the potential to cause serious injury or even death. Police want anyone who witnesses or is a victim of such behaviour to report it immediately.

The Weekend Sun has only just learned of the attacks on the taxis and although there seems to be a lull right now, a few weeks ago they were happening regularly.

“Every cab was complaining,” says Ash. And there seemed to be a pattern – Saturday night between about 10pm and 2am Sunday morning. “They would be coming off the bridge from Mount Maunganui and exit into Dive Crescent headed into the city. And they would be thrown at the cars – balls, golf balls.”

Bumpers were struck, bonnets were damaged. “And they smashed the glass,” says Ash Marwaha. Taxi windows were broken. There have been no reported injuries, although one cabbie asked Simon Bridges what he thought would happen if he left his car window open and was hit in the head by a golf ball. “I thought to myself: ‘even if the window wasn’t open. This may be considered a small act but one that can have huge consequences’.”

After the last incident, taxi drivers made a beeline for Cliff Road in the hope of finding the perpetrators. By the time they got there, the offenders had absconded.

Police also say that unfortunately there were no lines of enquiry to enable them to identify of the offenders responsible and the cases were filed pending receipt of new information.

There have also been financial consequences for the driver according to Ash Marwaha. “Sometimes their excess is $1000. But depending on the damage and how they get it fixed it’s still cost them about $500.

In Auckland recently a man was arrested after rocks were thrown from a motorway overbridge. He faces a charge of endangering transport which carries a maximum sentence of 14 years in prison.

In 2006 a 20-year-old building apprentice was killed by a stone deliberately thrown at his car as it travelled beneath an overbridge on Auckland’s southern motorway. A 14-year-old was found guilty of manslaughter and jailed for four years.

Under the Police’s nose

Shouldn’t be hard for the police to catch these guys as their station is only a stone’s throw away...