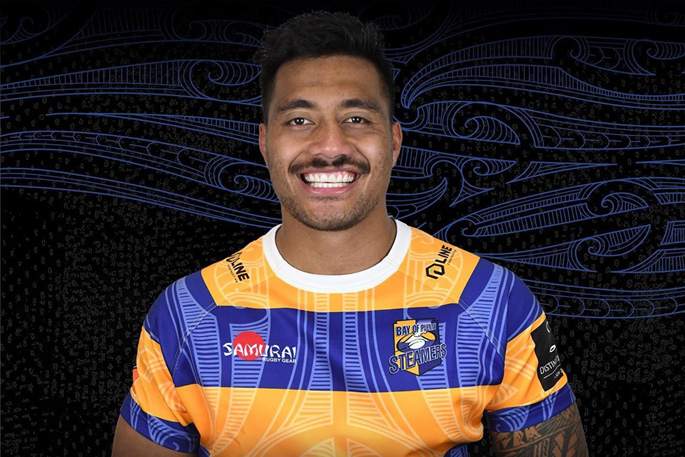 Abraham Papali’i is joining the Steamers for the upcoming Mitre 10 Cup season.

The Bay of Plenty Steamers have gained a valuable signing with former Roosters NRL league player Abraham Papali'i joining the side for this year’s Mitre 10 Cup.

Papali'i played junior league for the Glenora Bears and Pt Chevalier Pirates as well as rugby union for Massey and North Harbour before being signed by the New Zealand Warriors in 2013.

In 2014, he signed a two-year contract with Sydney Roosters. He made his NRL debut for the Roosters against South Sydney Rabbitohs in Round 6 of the 2016 NRL season. He has played second-row, lock and centre.

In November 2016, he joined French Rugby league club, FC Lezignan in the Elite One Competition and this will be his first year back playing rugby union.

“I had a bit of a run of injuries at the back-end of my league career and I thought I would try something different. I wasn’t enjoying [league] when you have injuries. So, I needed a change and have some fun again,” says Papali’i.

“I went back to a local club and just started playing there and all of a sudden, I got picked up by the Bay.”

Papali'i says he struggled at first with the transition to rugby, but it wasn’t because of the differences between the two codes.

“Waitakere, weren’t doing too well, they were getting beaten 50 points every game, which isn’t too much fun.”

The 26-year-old says he was happy to come play the entire second round of the Farmlands Co-operative Baywide Championship for Greerton Marist who made it all the way to the semi-finals this year.

Papali'i, who played No.8 for Greerton Marist, says he is enjoying the Bay of Plenty lifestyle and being a part of the Steamers set-up.

“I’m really enjoying it, especially being with a good bunch of boys and all the staff at Bay Rugby. They have been really welcoming and made the transition easy. Especially coming from Auckland and being new here.”

The 1.94m, 115kg Papali'i says he is looking forward to playing for the Steamers at this year’s Mitre 10 Cup.

“I’m really happy, Clayton has taken a chance with me and I guess what I’m trying to do is repay him back by getting into the best shape I can and hoping to add some value to the team. If he names me in the team for game day, then I’ll be grateful and I’ll try my best.”

The Steamers get their season underway with a home game against Otago on August 11, at Tauranga Domain, kick-off at 2.05pm.