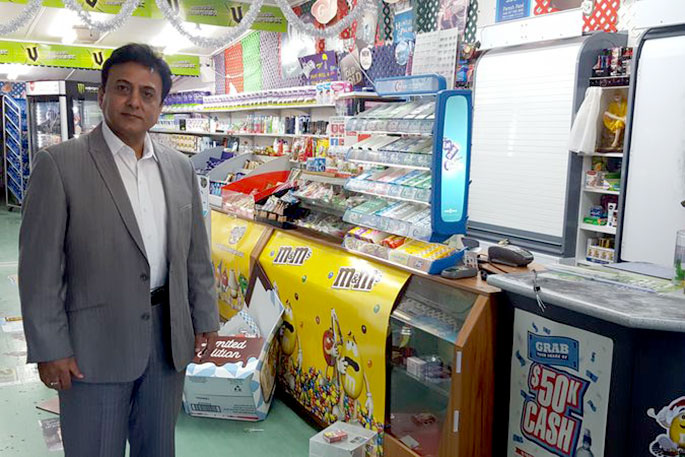 Crime Prevention Group president Sunny Kaushal says some dairy owners had given up on police and are not coming forward. - Photo: RNZ / Sally Murphy.

Police are reporting a sharp drop in dairy robberies after the government dished out more than $2 million for extra security measures.

The National government established a $1.8 million fund to cover half the cost of fog cannon security systems for at-risk dairies in June 2017.

A fog cannon security system involves a machine that fills a room with dense fog, preventing the intruder from seeing anything.

Businesses were slow to take up the offer, cannons costing around $4000, so the coalition government lowered the contribution rate to $250 and now the money was all spent.

National prevention manager Superintendent Eric Tibbott says fog cannons had been installed in 445 dairies and a further 90 at-risk businesses would get the security system after the government allocated an extra $370,000.

He says the cannons, mostly installed in shops in the Counties Manukau, Waikato and Tauranga districts, had led to a 40 per cent decrease in reported aggravated robberies.

"We've had around 16 activations in locations where we've put the fog cannons in and we've checked the CCTV and of those we've had very little property stolen and no violence committed against the victim in those locations so it's very, very effective."

Eric says a "phenomenal" 61 per cent of dairy robberies were being solved.

"We're holding people accountable but it also sends a message to those people who consider committing an aggravated robbery that there's a good chance they'll be caught."

It's been more than two years since 28-year-old Vikas Dubey was attacked inside the Kingsford Supermarket in Māngere East.

He was stacking shelves with his back to the door when four masked men, two armed with machetes, stormed the store about 7.30pm.

"They were punching my neck and face and suddenly put the knife on my neck. I was semi-conscious and didn't realise what was happening."

The attack was over in 30 seconds and Vikas, lucky to escape with cuts to his head and neck, was back to work a month later.

Kingsford Supermarket has since been identified by police as an at-risk business and a fog security system has been installed.

Vikas says it's given him peace of mind and his boss now pays for security staff to man the front of the store in the evening.

"I'm more aware in the evening time. I didn't expect the robbery but now we've got a fog system and always wear the panic alarm after 4pm."

Down the road Satish Makingi, owner of the Graeme Ave Superette, says his business missed out on getting a fog cannon.

He had to rely on CCTV cameras and local police, but said they'd failed to follow-up on security issues in the past.

"We called a third time and asked when they were coming, because it was time to open the shop at 6.30am, and they said they were still coming but they never turned up so we just cleaned up and opened the shop."

Satish has worked in the store for 32 years, first as a shopkeeper for his uncle and then as store owner after he bought the business.

He says running a dairy was a risky business but he, like many other store owners, couldn't afford to stop selling targeted items like cigarettes.

"It is dangerous but we can't run away from it we've just got to keep going. We've always got to be vigilant, especially at night and in the winter time.

"People think dairy owners make a lot of money but it doesn't come cheap. [We work] seven days, 14-15 hours a day with no holidays. It's not easy."

Crime Prevention Group president Sunny Kaushal says some dairy owners had given up on police and the judicial system.

"Small businesses aren't coming forward to report incidents because they are losing faith the police and judicial system.

"The police are doing their job but sentences given by judges are too light and the offenders are let go so easily."

Sunny says business owners also worried their dairies would de-value if they reported targeted attacks so preventive measures, like more police and harsher penalties, were needed.

"The government needs to come up with some sort of deterrent factor. We need to put a fence on top of the hill rather than waiting with an ambulance at the bottom. The offenders must know they will get caught and will be held accountable for their serious crimes."

Police Minister Stuart Nash says police are taking a "prevention first" approach by working with dairy owners to change the layout of their shops and ensure the surrounding area was well-kept and well-lit.

He hailed the aggravated robbery initiative as a "great success" and said he'd asked the police to review the initiative before any further funding decisions were made.

'This is a priority because it seems to work but we just need to collate the evidence and do a cost benefit analysis to make sure further investment is warranted. We're certainly not ruling [more money] out at this point."

In the meantime, Superintendant Eric Tibbott says the general public shouldn't hesitate to call police if they saw any suspicious activity around dairies.

"It's about looking after each other, working together as a community and making sure dairy owners who are providing a great service are looked after."

if the laws were tougher instead of just flagging the punishments off then the shop owners would not have to deal with the constant costs put onto their business..the shop owners have less rights than the robbers, so government, just open your eyes and step into the real world.