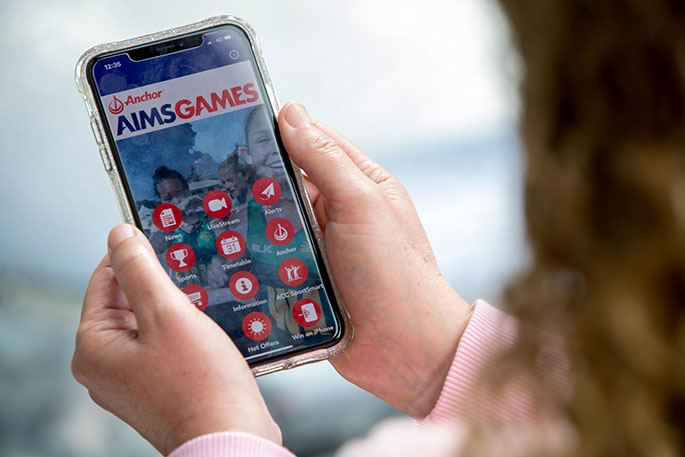 A view of what the app looks like. Photo: Jamie Troughton/Dscribe Media.

It's already one of the biggest sporting tournaments in New Zealand - now the Anchor AIMS Games will be one of the most connected.

Organisers have just launched a new mobile app and have confirmed Trustpower will be the official internet partner of the tournament, providing free streaming services and public Wi-Fi to a number of locations for September's week-long intermediate-aged championships.

With more than 11,500 athletes competing across 23 codes, as well as thousands more supporters and officials, tournament director Vicki Semple believes Trustpower's involvement will be a digital game-changer.

"Last year, we had more than 8 million hits on our tournament website in September alone, with the number of unique visitors and the duration they were on our site equally mind-blowing," says Vicki.

"This year, all the Anchor AIMS Games draws, information and results will be available through the app and Trustpower's partnership means that all tournament information will be literally at the fingertips of everyone interested in following the action."

Less than a week after launching, the app has already been downloaded 1438 times. It has been developed by Auckland company,

The Sports Agency, who are experts in delivering apps for events, schools and sporting organisations with a wide range of clients.

It tells users how to get around the different venues at AIMS, gives the latest bus timetables, allows viewers to access the live-streaming and features news and alerts.

For the second year in a row, award-winning national media company Stuff will be hosting both daily news highlights and live-streaming through its www.stuff.co.nz website, which users can access directly from the app.

There's also a section on the activations run by the tournament's main sponsor Anchor, as well as detailing the different warm-up zones run by ACC SportSmart.

And until the Monday of the AIMS Games (9 September), there's also a chance for anyone downloading the app to win one of two iPhone XR mobiles, donated by Trustpower.

Spokesperson Stephanie Symynuk says that Trustpower - which already sponsors one of the main AIMS Games venues (Trustpower Arena) - is proud to support the thousands of AIMS Games athletes in a unique way this year.

"It’s an important week for the athletes and their supporters and keeping everyone connected is a big part of this.

"Providing Wi-Fi at a number of the AIMS Games venues will enable easy access to key information, leaving more time to focus on events, recovery and connecting with others."

The 2019 Anchor AIMS Games will run from September 8-14 at a range of venues across Tauranga.

This will be the 16th edition of the tournament, which first started in 2004 with 750 athletes across four sports.