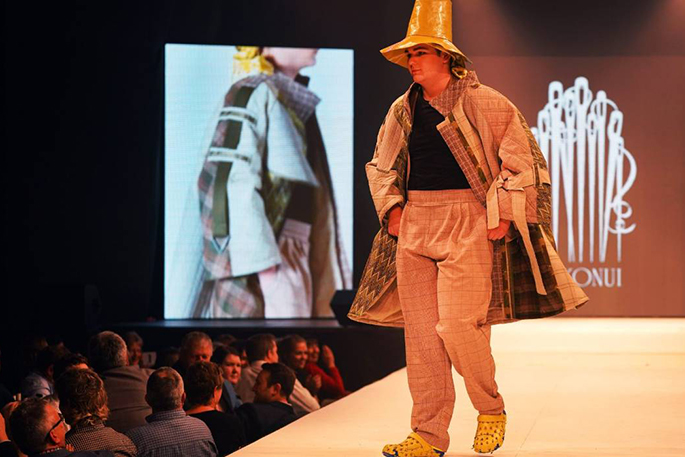 A pair of gold Crocs, matched with cream trousers, a jacket of many colours and a gold top hat won the Award of Excellence at the MLT Hokonui Fashion Design Awards in Gore on Saturday night.

The entry, from Donna Dinsdale of Tauranga, also won the menswear award at a night where weird and wonderful creations shared the catwalk with well-tailored, practical designs.

Dinsdale was not at the awards to celebrate her win.

The Award of Excellence was won by Donna Dinsdale of Tauranga, who won the menswear section with this entry #hfda19 pic.twitter.com/kjPB0rVNRd

Earlier in the evening, at a packed Gore Town and Country Club, Debbie Smith of Waimumu won the open recycled section after spending about 400 hours creating it.

Smith's entry was designed to celebrate the memory of 13-year-old Jonty Carran, who died in his sleep in 2016. 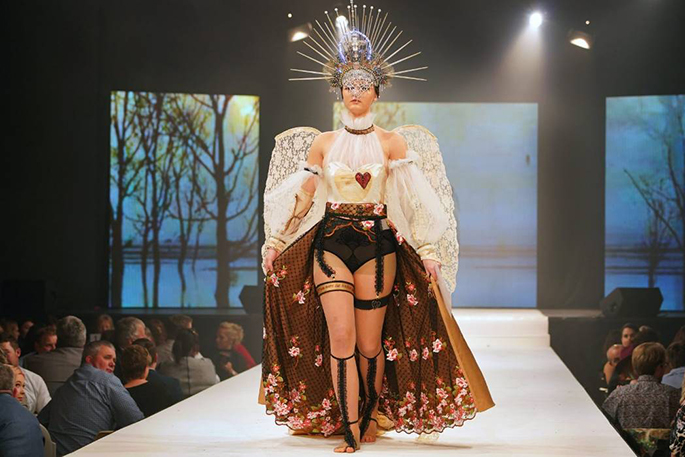 Smith and Sue Carran, Jonty's mother, were at the awards to see the entry on the runway in the recycled section, modelled by Jonty's cousin Hope Imlach.

Speaking after being announced as the winner, Smith said she was "emotional and overwhelmed.

"Just to see it on the stage for the beautiful Carran family and to have Hope wear it meant more than the win, but the win was just brilliant.

An emotional Carran said simply "that is love."

The poem on the back of the garment, which featured wings made of vintage chantilly lace, armbands with letters from Jonty's brother and sister, and a neck choker made from the family car's number plate, was Mother and Son. Imlach carried a book filled with letters and quotes from friends and family about Jonty on the catwalk.

Smith, whose husband was Jonty's rugby coach, used coffee to age the fabrics and the headpiece is recycled jewellery, bamboo sticks, and chop sticks.

The awards also had an international flavour this year, with My City collaboration from Wuhan Polytechnic in China, who work alongside the Southern Institute of Technology in Invercargill, winning the Collections section.

Gore's Viv Tamblyn continued her winning streak with the competition. Having previously won the overall award, this year she won the Streetwear Award and the Heather Paterson QSM Memorial Trophy for Best Southland Designer.

Helen Marshall of Invercargill picked up the Natural Fibres award and Rachel McNab of Christchurch won the avant-garde section.

The Young Designer Award was won by Lucy Hill of Christchurch, who also won the Nightlife Award with her crowd-favourite yellow and lavender ensemble, and the Auaha Award was won by Vesesio Louis Thomsen of Auckland.

Courtney Cansdale of Christchurch was awarded the Garment with the Most Commercial Potential Award and Ethan-Blair Allchurch- Rush won the Best Use of Wool Award.

The Bernina School Award of Excellence for the best entry in the schools section was won by Abby Clayton of Bayfield High School in Dunedin.