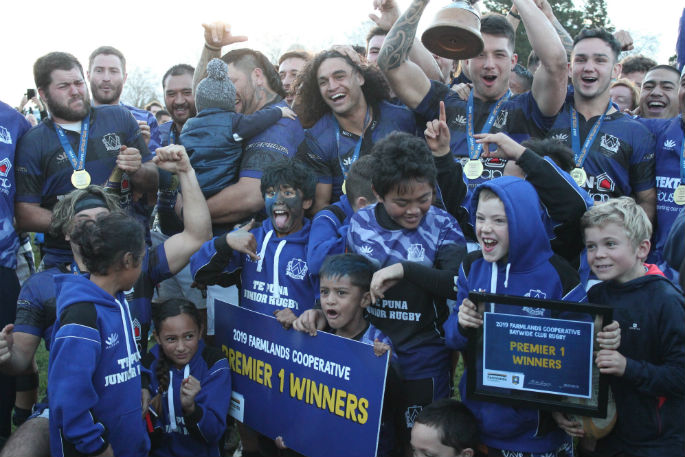 Sometimes sporting outcomes give the impression of being influenced by a higher power.

Te Puna may well be thinking their tipuna (ancestors) played a part as they won their first Baywide Premier Championship title last Saturday in the club’s 100th year.

As sporting scripts go it takes some beating.

Te Puna were too strong across the park in beating eight-time champions Tauranga Sports 23-10 at a packed Maramatanga Park that just exuded community spirit and atmosphere.

Wairoa Bridge was decked out in black and blue balloons by 9am and roadside signs on the way to the park made the visiting supporters and players acutely aware they were entering a cauldron of staunch support.

Tauranga’s large contingent of supporters added plenty to the occasion and their young team exceeded expectations by making it all the way to the final. Te Puna’s fine captain Kaydin Budd made mention in his celebratory speech of the advantage his side had from losing last year’s final to Te Puke Sports.

Tauranga began strongly and jumped out to a 7-0 lead but by halftime Te Puna were up 13-10 with a strengthening wind and exuberant home crowd behind them in the final stanza.

The match was decided by a slim, polite young man from Opotoki who was celebrating his 21st birthday the same day. The brilliant speed and stepping of fullback Rewita Biddle took him to his 19th and 20th tries of the season and a first ever Baywide Premier title for the blue and black army.

Te Puna also won the Development final (48-17 v Te Puke Sports) and Senior Reserve final (26-25 v Matakana) for an unprecedented hat trick of titles. Not only does the club have a Premier team brimming with audacious talent but there is some serious depth in playing resources to build on for the future.

Coach Aidan Kuka has guided the side for the last three years to a position of real strength and influence in Bay of Plenty club rugby. Aidan is one of three players along with Heywood Kuka and Dan Schuster to have played more than 300 Premier games for Te Puna and their shared bear hugs after the final whistle were not for the faint hearted.

Aidan now moves on to coach the Bay of Plenty under-19 reps who are defending national champs. He leaves a legacy of excellence and results that will be the benchmark for the next Te Puna coach.

Good luck to all involved with the club.