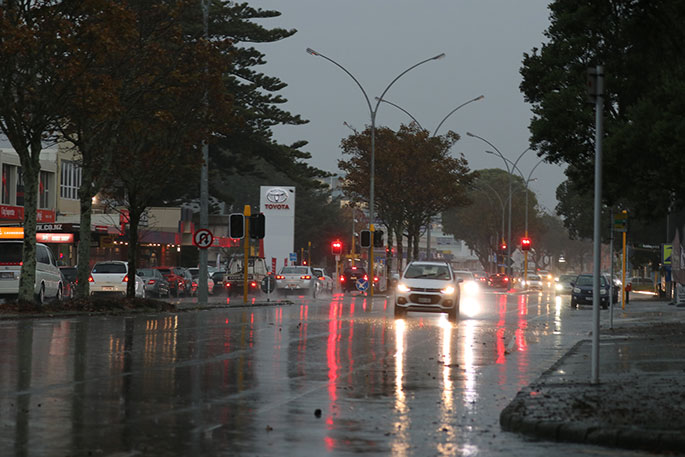 The section of Cameron Road between Harington Street and 17th Avenue is being considered for transport impovements. Photo: Daniel Hines/SunLive.

An update on short-term plans for Cameron Road has been provided to Tauranga City Council's Urban Form and Transport Development committee.

TCC staff reported on transport improvements, specifically for the section of Cameron Road between Harington Street and 17th Avenue at yesterday's meeting.

The focus of the update was on future priority measures for buses along this main transport corridor.

“Cameron Road is of huge significance to our city and we need to make it easier for more people to walk and travel by bus or bike," says Christine Jones, General Manager: Strategy & Growth.

"To achieve that, we must support a shift to a more multi-modal corridor. One of the first steps we are looking at to achieve this, is by improving reliability for public transport along the Cameron Road corridor.”

Various options to support the Public Transport Blueprint, which seeks to encourage more Tauranga residents to catch the bus, were discussed during the meeting.

The main outcome is the possible removal of an existing traffic lane in both directions for an all-day or peak period bus lane or High Occupancy Vehicle (HOV) lane has been discounted.

This decision was based on modelling, which indicated this option would significantly worsen traffic flows.

The option of a peak-time bus clearway was also considered.

This would replace the existing on-street parking with a bus lane during the morning and afternoon peak periods.

Parking would continue to be available outside those times.

Transport modelling and public engagement have identified that the removal of parking to provide peak-hour bus clearways would not have significant benefits for the part of Cameron Road between Elizabeth Street and 9th Avenue.

However, further investigation is necessary to determine if public transport benefits would justify the removal of parking for a peak-time bus clearway on some or all of the section of Cameron Road between 9th Ave and 17th Ave.

Council staff have been asked to report back to Council on the options for improving bus travel time reliability and improving facilities for people walking and biking.

This is intended to occur in August.

In the meantime, Council staff will continue to work with affected businesses, landowners, schools and residents along Cameron Road to investigate possible improvement options.

It’s all about more growth than the roading and infrastructure can cope with. Greerton was a great success in slowing down traffic. I try to avoid going into town with the construction and traffic. More like Auckland everyday. Maybe buses will work better though even though having to transfer buses to get where one wants to go takes twice as long . Riding bikes well very few of those, riding too hard as is walking for most. Guess we await this " progress" and see

Why look at early Cameron Rd when the problem area is FROM 17th Ave up to Barkers Corner? That’s the bigger problem.

SO the Council Clowns

If you don’t impede the traffic flow then no bugger is going to use public transport, if it is more user friendly that is. Try out the one lane restricted closure first before spending millions of dollars and bankrupting many businesses because of a lack of street parking.