Mount-brewed beer a hit in Europe 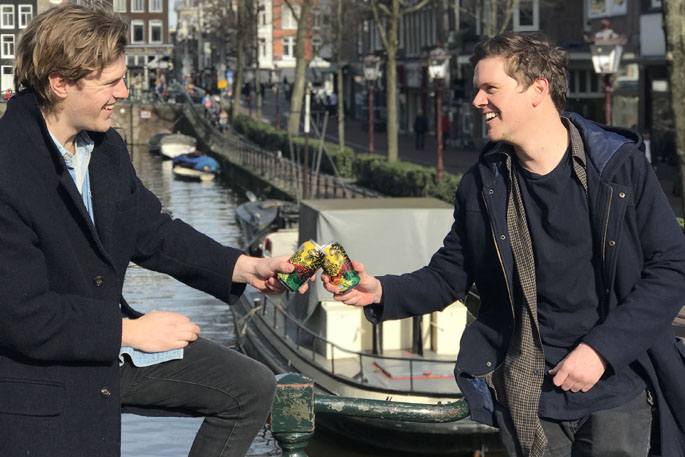 A beer brewed in Mount Maunganui is a ‘popular drop’ for train commuters in the central Netherlands, the brewers have discovered.

The brewing team at craft brewery Funk Estate was surprised and delighted to find that one of their sour beers is going down well with train travellers in Utrecht.

The city is the Netherlands fourth largest and it is a major hub for rail transport with intercity services connecting other Dutch cities.

“We became aware of the popularity of our Jungle Boogie sour beer after noticing a growing number of reviews on a craft beer review App, Untappd,” says CEO Jordan Evison.

“It appears that there is a culture among train commuters to share interesting craft beers during their journeys – and Jungle Boogie is one that travellers are trying – and liking.

“Given that Europeans are very sophisticated beer drinkers and countries like the Netherlands have brewed beer for centuries, with label like Heineken, it’s pretty cool and rewarding that they are appreciating our home-grown Kiwi product.

“It seems that our UK distributor has opened up a new market for us in the Netherlands and Jungle Boogie also seems to be getting quite a following in bars in the city of Utrecht.

“I won’t get into exact numbers, but suffice to say it is a very quickly growing market for Funk Estate,” he says.

Funk now annually produces ‘hundreds of thousands of litres’ and exports beer to countries including Australia, Japan and Thailand and has also exported to Taiwan.

“We have even sent a one off order to Scott Base,” says Jordan, “but sour beers like Jungle Boogie has been a huge success overseas and our biggest export market is very quickly becoming the UK.”

Funk re-located from Auckland a few years ago to team up with Mount Brewing Company and share brewing facilities at the Rising Tide Brewhouse and eatery in Mount Manganui.

As CEO, Jordan runs the company with partners Dylan Shearer and Shigeo Takagi.

He says that Funk’s craft beer called Jungle Boogie, a ‘blood orange’ sour ale, has been one of their most popular beers on the Australasian craft beer scene.

“Last year Jungle Boogie was voted number 16 in the Hottest 100 Kiwi beers, and was also the biggest mover on the list, improving from its 87th spot the year before.

“Fingers crossed we’ll improve on that this year,” says Jordan.

Funk’s range of canned beers and kegs are distributed widely throughout New Zealand, and are available at all good beer venues, he says.

Funk likes to work with the wider industry and team up wherever possible, says Jordan.

Funk Estate was a recent finalist in the Bay of Plenty Export NZ Awards 2019.