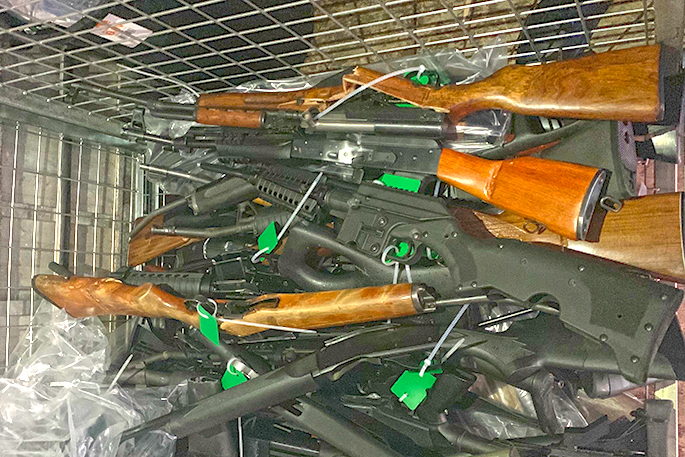 Firearms handed in at the Ohope buy-back event. Supplied photo.

Misgivings about the practicality and cost of a firearms register is likely to dominate feedback from rural areas on the second round of proposed Arms Act amendments, Federated Farmers says.

The proposals feature a range of tighter controls on firearms ownership and licensing and Federated Farmers rural security spokesperson Miles Anderson anticipates support for many aspects of the changes.

"When firearms are used irresponsibly or illegally in New Zealand, it is often farmers who suffer the consequences through the theft of livestock, poaching of wild animals or the risks of dangerous behaviour. Hopefully some of these proposed changes will help to prevent that."

But registration of firearms is contentious. Federated Farmers has previously opposed the compulsory registration of all firearms, based on the complexity and cost of this process, questionable safety benefits and the likelihood of success.

"We haven’t had a firearms register in New Zealand for almost 40 years. The successful re-establishment of one now would require a considerable investment, both economically and socially.

"We are very interested in how the Police propose to practically manage common activities such as the loaning of firearms between two licensed individuals," says Miles.

As with any issue, Federated Farmers will consult with its members on the whole range of amendments before submitting.

"We are pleased to see that this time there is a reasonable consultation period. This is a very important issue for farmers and we need to get it right."

Federated Farmers will also have things to say about some of the earlier amendments to the Arms Act. Since the initial changes in April, the current pest management criteria have been proven to not work for those farmers and land managers who still need semi-automatic centrefire rifles for pest management.

"Pest animals can be found in very high numbers on some private land and the right tool is needed to control them humanely and effectively," says Miles.

"Continued access to these firearms under strict controls is essential for both our primary industries and indigenous biodiversity. We will use the second round of consultation to re-visit this important issue with the select committee."

Guns themselves are not...

The issue. Guns have been invented, they are here, they can not be gotten rid of. Who has the gun is the issue. In a bank robbery, as an example, the bad guy is holding some hostages at gunpoint. His gun is bad. If a hostage knocks the gun from his hand and fights him, the gun is now neutral (not good nor bad) and can become either. The other hostages are hoping that the good guy will pick up the gun... or the police will hurry up and arrive with their good guns. We need to have more GOOD guns than BAD guns in our society. Unfortunately, the good gun owners are handing theirs in... meaning by handing in good guns, the bad guns are gaining more and more power.

I hope they just dont dump them there must be a lot they can check over at the armory and use for police,army,navy etc to save the tax payer.