New Zealand come from behind to claim gold 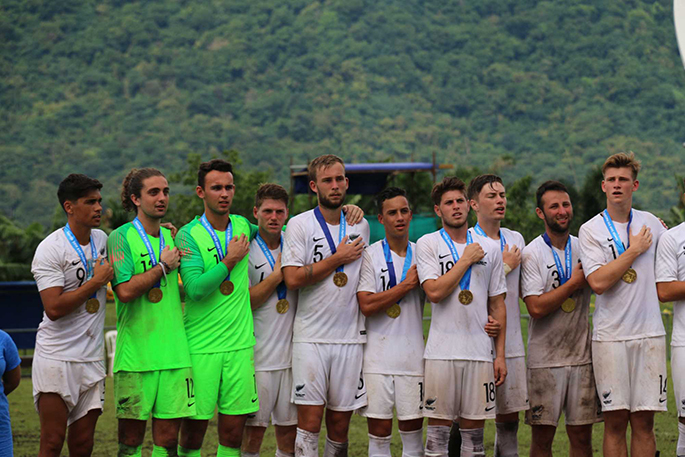 The New Zealand U-23 men stand to hear the national anthem after receiving their gold medals. Photo: Pacific Games.

New Zealand have staged an incredible comeback to win the gold medal in football at the Pacific Games for the first time.

The Des Buckingham coached U-23 side scored twice in the final few minutes to stun three-time defending champions New Caledonia at the J.S. Blatter Football Complex in Apia.

Des said the come-from-behind win was typical of the character his squad has shown over the past two weeks at the Pacific Games in Samoa.

“If you are going to win a final, that is a great way to do it, score twice in the final minutes and to win it the way we did. Full credit has to go to the players, it is a fantastic achievement,” he said after the win.

New Caledonia, the most successful side in the competition’s history with seven titles, went into the final without conceding a goal. They took the lead in the 55th minute when Richard Sele made a decisive run down the left flank and hit a shot from the edge of the penalty area. New Zealand’s goalkeeper Conor Tracey got a hand on the shot but could not prevent it finding the back of the net.

New Zealand rallied in spectacular fashion. They got back on level terms in the 86th minute when a Jorge Akers’ free-kick was headed home by stand-in captain Dane Schnell.

Five minutes of injury time were added and New Zealand had the momentum. They broke clear down the right wing and Jorge had the chance to win the game but was denied by some superb goal-line defending.

From the resulting corner-kick, big centre-back Billy Jones was on hand to deflect home with his shin for the win. The New Zealand team ran to the corner to celebrate an incredible comeback and moments later they were confirmed as the gold medalists. Des reflected on the two late goals.

“Jorge won us a fantastic free kick and Dane has arrived, similar to the way he did against Papua New Guinea, wearing the captain’s arm-band and it was the perfect time to score a captain’s goal. It was great to get the equaliser,” says Des. “The second one, Billy Jones is claiming it, but I am yet to see it. We got the ball into a dangerous area again and it was great to score twice from set-piece. We hadn’t scored from set-piece all tournament so we were due and New Caledonia had not conceded a goal all campaign, so to put two past them was a fantastic achievement for this playing group.”

Des said his team had achieved despite all of the challenges they faced coming into this tournament.

“When you put this win into context, the fact that we came here with 18 players rather than 23. We have had three days preparation so it was the first time that they have played together,” says Des.

“We had ten players make their international debuts, to compete in a senior competition with the average age of 20 years old. It shows that we have good players and if we can provide them a good environment then they can achieve on the world stage.”

The young New Zealand team completed an impressive tournament. They were undefeated throughout, scored 22 goals and conceded only two. But it was the second-half comeback which is what everyone will remember. Des added Jorge, Stafford Dowling and Robert Tipelu in the second half to chase the game.

“We tried to inject a couple of players to inject some life into the frontline,” says Des. “You could see that the five games in a short space of time had taken its toll both on the pitch and the players.

“We tried to have a go at them in the second half and I felt we did that. This has been great preparation for September. Both the international window and the qualifiers for the Olympics.”