Smaller and cheaper is the ticket 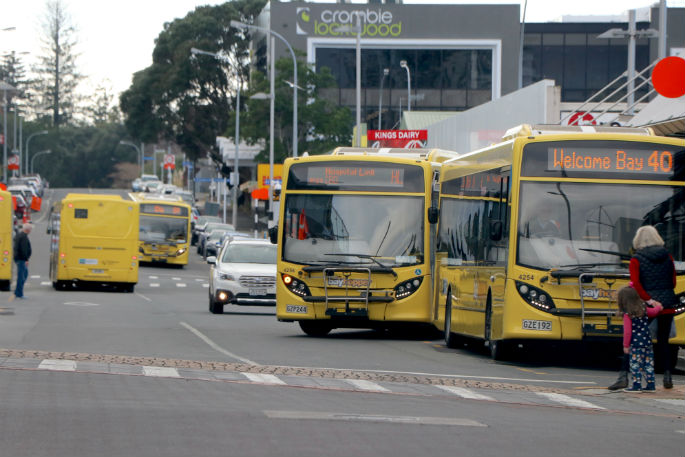 Buses pick up and drop of people on Willow St this week. The number of people using them is gradually rising. Photo: Daniel Hines/SunLive.

Simon Bridges is in touch with the hoi polloi. He takes a bus.

“Not often to be fair. But I have taken the kiddies – Emlyn, Harry and Jemima - on them a few times.”

And the man who’s entitled to a Crown chauffeured limo, or even a cab chit to the airport, says he would definitely use the ‘big yellow’ from Matua – his hood – if he was a regular commuter into town.

He is also aware of the perception that buses are travelling to and from all points of the city at all times of the day with very few passengers. They’ve been dubbed the ‘yellow circus’ – going round and round but few people paying for a ride.

“Everyone acknowledges the need for developing public transport in the Western Bay of Plenty. But it needs to be done right,” says the Opposition leader and Tauranga MP. “And to me, that’s about smaller fit-for-purpose buses rather than these big yellow barns which everyone can see, have no-one in them. It’s about regular times and smaller buses.”

The Regional Council which runs the buses say they are onto it. It’s considering the place of smaller buses.

“It’s a balancing exercise between catering for peak loads in the morning/afternoon and smaller loadings in the inter/off peak,” says the council’s transport policy manager, Garry Maloney.

“Clearly it's not economically efficient to run two fleets to cater for larger or smaller loads.” So the council will do some work on ‘right-sizing’ of buses. “But having said that, you don't pay small wages for driving small buses,” says Garry.

And despite the perception of a seemingly endless traffic of empty ‘yellows’, patronage from December last year to the end of June was actually up 3.1 percent or about 26,000 passengers to 863,682. “The council’s pleased the new network has reversed the trend of declining passengers, but is always eager to see it grow further.”

Simon also has issue with fares.

“The fare structure needs to be sorted. They should look at cheaper fares because the council can afford it. It does very well out of the Ports of Tauranga and that would encourage more people to use the buses.”

The Regional Council explains it plans a fare review next year. But it will have to balance what users can pay with what it is reasonable for the community to pay.

But the MP can’t talk transport without mentioning roads.

“None of this gets away from the number one issue and that’s to fix the bloody roads.”

He says the region needs both.

“The order of importance is a greater transport network, the roads being done right and then moving onto public transport. The problem is the government and the regional council seem to want to do it the other way round which will never work.”

I agree that smaller buses are the answer (and more of them...). They ran such a service in Hampstead Garden Suburb to bring people in and out of Golders Green. (nearest Underground connection to London...) Minibuses around every half hour, on a designated route through the suburb and you didn’t even need to be at a "bus stop" you just walked to the bus route and could put your hand out and the bus would pick you up. They also experimented with people being able to phone for a bus (like a taxi) but I believe it wasn’t viable.

The distance from Hewletts Rd is not far but it would be quite a hike if you were carrying luggage. I agree that the extra delay to people travelling elsewhere is problematic, but maybe a specific "airport bus" like a shuttle could solve it.

They weigh to much

You might have noticed that alot of bus routes have undergone roadworks in the past few months. I know its hard to tell with all the road works around but alot of them are on bus routes. Dont believe me? Go see windermere, links(finally done) and gravatt road... as for hewlets road you technically dont need a sole bus lane there, a commuter lane would ease alot on issues in that area.

Was an airport bus some time back for a while but nowhere near the demand that warranted the additional delay (adding 15 minutes to a route service) in getting folk where they wanted to go. Too few flights, too small a population. Actually not that far to walk from Hewletts Road.

I agree with Simon Bridges. For peak service, you just need more frequency of smaller buses. Just back from Melbourne and they have a free city loop tram service which connects to fare paying rail network. surely we could use small/large buses on longer or outer city distances and connect to free city loop network of buses

Why is there not an appropriately timed and occasional bus that loops into / out of the airport on it’s run between city and Bayfair ????

Finally He has come up with a suggestion that has merit.Those B---y buses take up sooo much road space,and why has it taken so long for some one to speak up about them.Those dickheads in Council are more concerned with cycle tracks and bridges which you see no one using