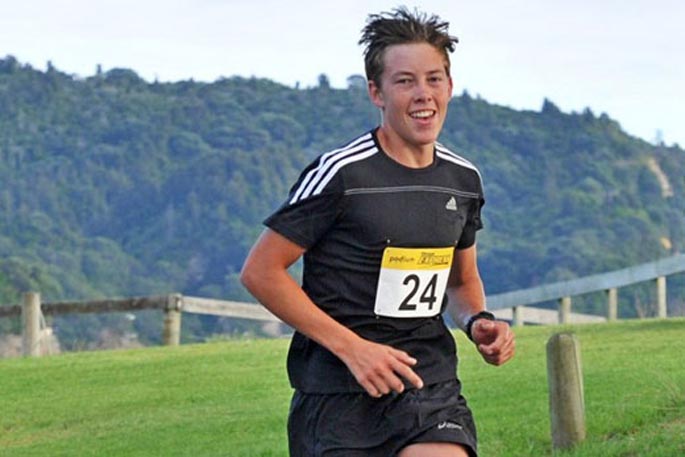 A young Hayden Wilde competing in a race in 2015. Photo: Bruce Belcher.

A Bay of Plenty triathlete is representing New Zealand in Edmonton, Canada, as part of the ITU world triathlon mixed relay series.

Hayden Wilde, who was born and raised in Whakatane, and now resides in Tauranga, is looking forward to compete against some the of the world’s best.

Leading up to the race, Hayden says he has had a great preparation, and he describes Tauranga as ‘underrated’ for a training base.

“The riding is perfect with flat areas, and also very hilly areas, and the running trails go forever which we are very lucky to have.

“My coach Liz van Welie has one of the best pool facilities in the bay.”

Despite being based in Tauranga, Hayden says he loves heading back home to Whakatane to train in his home town.

“It’s quiet and easy to get around, as well as having a break and chilling with the family.”

Hayden took up the multisport later in comparison to his competitors. At 21 years of age, he is in his second year racing triathlon.

He says he never took part in triathlon as a child, however he was more into multisport such as kayak, biking and running, as well as Xterra, and off road triathlon.

“I’m still very new to the sport compared to most of the guys I race,” Hayden says.

“They have been doing it most of their lives, so I am extremely happy of where I am at the moment from a performance perspective.

“I didn’t expect to be where I am this early on, so for me it’s just building on the momentum and getting stronger and faster.”

Leading up to the mixed relay race in Edmonton, Hayden says he has been based in Cardiff, Wales with the Welsh triathlon team.

The training has been extremely beneficial to Hayden, as he describes the training facilities as ‘next level’, helping him adapt to high level training rather easily.

The race in Edmonton is extremely important for Hayden, who is racing for New Zealand alongside Tayler Reid, Nicole van der Kaay, Ainsley Thorpe, Sophie Corbidge and Sam Ward.

Hayden was part of the 2018 world mixed relay team, which took home bronze. After competing in the race last year, he says he is stoked to be taking part again.

“Last year was my first world triathlon series mixed team relay race for team New Zealand, and I have good memories being the last in the team to get tagged and bringing it home, crossing the line and taking out third place for team NZ.”

Although the race is a team event, Hayden says it allows you to focus on your own performance because you want to give it your best and not let the team down.

In terms of Hayden’s future goals, he hopes to represent New Zealand at the 2020 Toyko Olympic Games and to podium at a world triathlon series.

He also wants to finish in the top ten of the world triathlon series rankings by the end of the year as he is now ranked 14th.