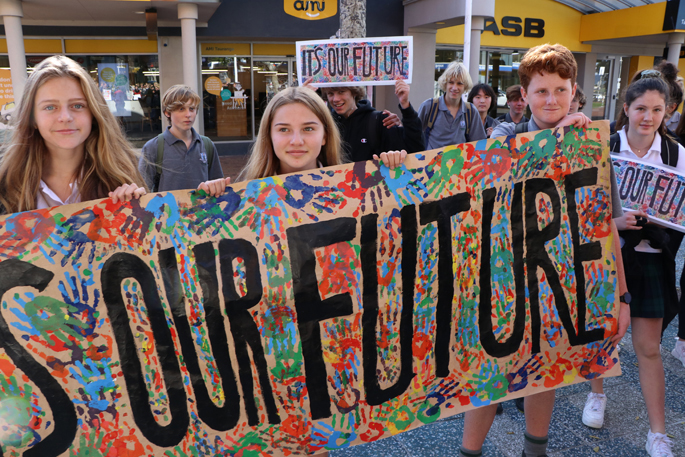 Organisers of the School Strike for Climate have begun contacting unions to get their support for a general strike at the end of September.

The strike on September 27, is part of a global week of action coinciding with the United Nations' Emergency Climate Summit in New York.

One of the organisers, Sophie Handford, says they wanted workers to join young people in calling for faster action on global warming.

"We are really wanting students, young people to bring along their parents, grandparents and we're also working on how we can engage with workers through the unions. We're pushing for this to be a general strike so we're encouraging adults to jump on board with us," she says.

Sophie says even if adults did not strike she hoped they would use their lunch breaks to protest at rallies and marches held on September 27.

Council of Trade Unions secretary Sam Huggard says striking would be illegal but union members would take some form of action.

"Calling it a strike is difficult for unions in a sense. You're able to strike in New Zealand for pursuit of a collective agreement or for health and safety matters, but certainly we've discussed this in the past couple of weeks across the movement and this will be part of a national week of action that week in September so whether or not it's a strike or it's other actions, workplace meetings, rallies and so on, there's definitely going to be a good union presence," he says.

Secondary school teachers went on strike in June over their pay claim but Post Primary Teachers' Association president Jack Boyle say they could not strike over climate change.

However, he says some schools might decide to send teachers to the September strike with their students.

"It comes down to the discretion of the school and if there is a number of students from a particular school who are attending on that day and the school decides 'you know what, we're going to enable teachers to be there' then that would be for them to decide," he says.

Jack says there were other ways teachers could help climate-striking teenagers.

"It's the business of educators to try and channel that energy and commitment into really productive ways of achieving what they want.

So helping them with how you might get a petition to Parliament or how you might provide additional support at the school level for the sort of campaign that I think they're running, that would definitely be something we're into."

Meanwhile, Sophie Handford says the relatives of school-strikers could expect to come under pressure to join the next protest.

She says adults should be calling for faster action on climate change because the futures of their children and grandchildren were at stake.

Todays teenagers are a force to be reckoned.. not for their stand but for the strength of their consumer dollars. They have more everything than a y generation before. Their electronics, wardrobes of clothes , designer labels disposed of regularly for the latest fashions, they travel in cars more than any before them. My point? They are part of the problem and probably more so than the older generations that had less consumables , expected less and made do, or went without. They in turn will bring more children to this world all who start with an even more entitled view of what the world will give them . So ponder modern consumerism and march to heighten awareness that you are as much part of the problem as anyone. In fact the third world would dream of being in your position and millions yet to come will aspire to