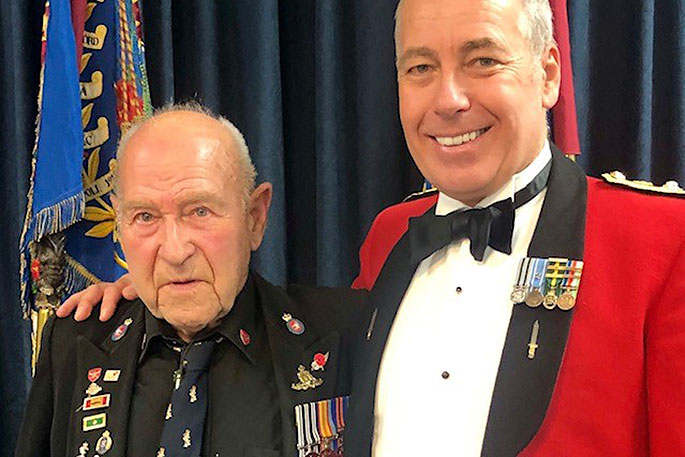 An 88-year-old Tauranga Corporal has received an Australian unit citation for gallantry in Vietnam.

The award was presented to Corporal Erik Kristensen from Colonel Tenby at the 6th Hauraki Battalion’s 121st birthday in Tauranga.

Erik was a solder with the Royal New Zealand Electrical and Mechanical Engineers and was attached to 161 Battery during the period of their deployment to Vietnam.

The award is a fitting tribute to a Unit with a long history of operational performance, says Tenby.

“It was a huge honour to present Corporal Kristensen with a pin to the Unit Citation awarded to the soldiers of 161 Battery, Royal NZ Artillery, for their gallantry in Vietnam.

“It was made even more special because we are both Tauranga locals who have served our country on military operations offshore.”

The Unit Citation affects 120 members of 161 Battery who participated in the Battles of Coral and Balmoral in Vietnam between May 12 and June 6 1968, together with other New Zealand Armed Forces personnel directly involved in one or both battles.

This is the first time an Australian Unit Citation for gallantry has ever been awarded to a New Zealand military Unit.

The Battles of Coral and Balmoral were among the largest and most protracted fought by the Australian Task Force in the Vietnam War.

“The 161 Battery Gunners received high praise for their rate of fire and rounds-on-target accuracy provided at critical stages of attacks on the Australian battalion positions,” says Tenby.

“On behalf of us all, thank you for your service, Erik.  Kia Kaha and Ubique.”